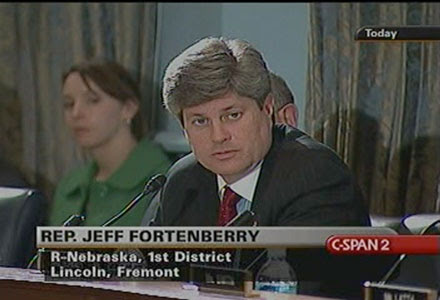 (C-SPAN. All others: house.gov)
Here is your champion! Yes, Jeff Fortenberry is clearly the winner of the prestigious "Best Congressional Hairdo – Male Division" trophy*. It's almost identical to Blago's coiffure, but salt-n-pepperier! And also like Blago's magnificent hair, I believe that despite all common sense and appearances, Fortenberry's 'do is real, real, thrillingly real (I'll show the evidence below).

Before we discuss the hair any further, though, I know all of you are growing impatient, saying Yes, yes, the hair is great, but does he appear in photo-ops with oversized novelty checks? I'm so glad you asked! Yes he does: 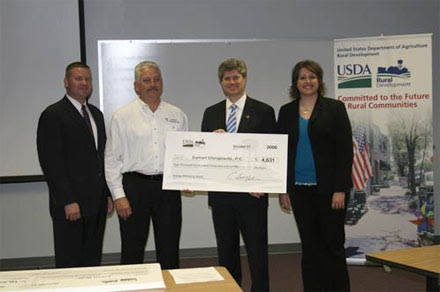 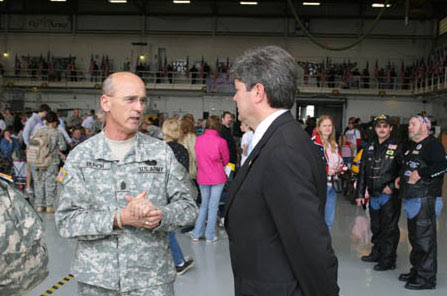 This is a very well-maintained cut! Also: Fortenberry should appear in photographs with men wearing chaps more often. Anyway! This view doesn't inspire confidence in the "is it real or a wig" debate. I'm tempted to think it's fake, a toupee. All the edges are so blunt! Wait, we need another view: 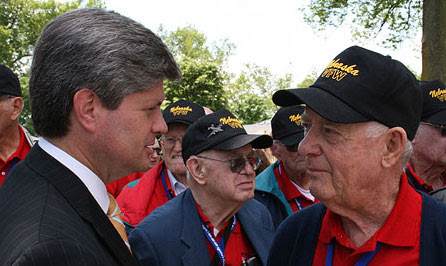 It really looks like something placed upon his head rather than something growing out of it, doesn't it? Particularly the "sideburns" are clearly styled down from the principle mass of the coiffure.

Finally, let's take a look at the authoritative, official headshot: 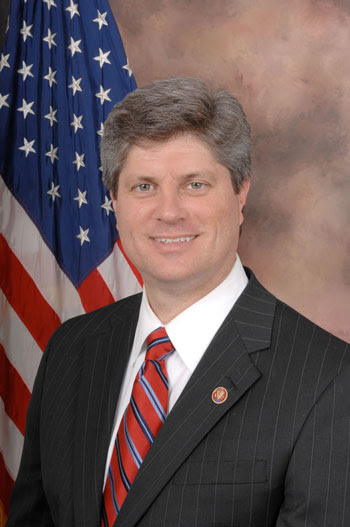 Hmm... it looks more convincing here, and you can see hair growing directly out of the head right next to the ears. Still, though, wigs, especially expensive wigs for insecure congressmen, can be very skillfully and cleverly blended. What we need is more evidence, and the picture above provides it! Go ahead and click the picture to open up the high-res pic, OK? What do you see all over his coat? That's right! Dandruff! Absolutely TONS of dandruff all over his suit! Enough to powder a donut: 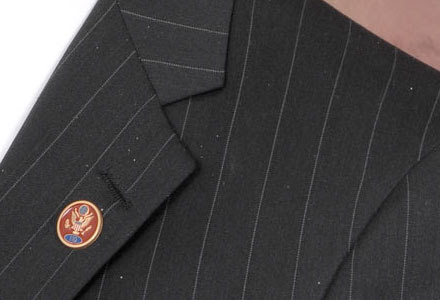 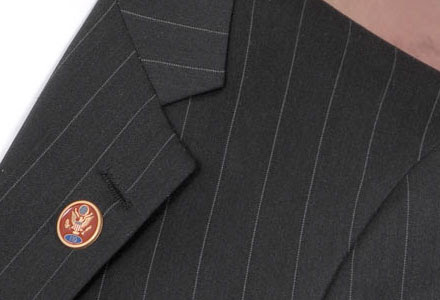 To me, the sheer amount of it tends to support the idea that the hair is real, because I can't believe that all came from his eyebrows. Please correct me if I'm wrong!

Most importantly, however, is that Fortenberry's hairdo appears to be expanding, as fantastically captured in the C-SPAN shot up top provided by Pony Pal™ Fritz. How much larger will it get? Oh, we can dream, can't we? If he didn't learn anything from Blago's recent multiple hair-related humiliations, I don't expect him to rein in the follicles (??!) anytime soon.

Oh, and just in case you think I'm making fun of a wonderful person, Fortenberry is a rank-and-file right winger: 0% from NARAL, anti-gay, anti-labor, etc., etc., and took a special interest, apparently, in banning poker from the internets.

So what do you think? I know hairdo isn't as spectacular as Traficant's (few are), as hilariously fake and weird as Ney's, nor as disastrously mismanaged as Feeney's, and it doesn't look like hardened Cool Whip™, like Jerry Lewis's, but you've got to admit the man gives impressive head. So I say here's to Jeff Fortenberry's Incredible Expanding Hairdo! For great justice!

Please feel free to compose a Haiku inspired by the mystery and majesty of Jeff Fortenberry's hair in the comments section.

*To be totally fair, if any Fortenberry staffers would like to collect an actual trophy to commemorate this honor, please contact me and I'm sure I can come up with something wonderful.
Posted by Peteykins at Wednesday, February 04, 2009

I'm not buying it Princess.
Zooming on on the high rez-
the head hair looks like it's
laying OVER the sideburn hair.
There's a shade difference too.
I'm not a betting man but would
lay odds that he's got a rug...

This from a baldie.

O Fortenberry
With flecks of Olympia
Snowe we know you're Right.

Mix that with low forehead man

Where is teen intern?

The official portrait is a normal amount of hair product. The C-SPAN2 shot is a complete Blago-wannabe makeover.

It's like walking around the mall in the early 80s and betting a friend whether you'd see more Madonnas or Pat Benatars.

You're really got to Google "fortenberrry dandruff." You come up first, but the snippets from the other sites are fabulous. An example:

Deep in a gray and black
forest, snow falls.
A wolf roams as pages cower.

i see artifacts of retouching on his face. it's almost as if someone removed a furrowed brow, but OMG the dandruff. this is almost as good as sarah's stache on the cover of newsweek.

however, i noticed that the EXIF data was rudely removed from the photo.

a photographer friend of mine likes to use a trick to make her models look faux sweaty. she'll rub them down with olive oil then spritz them with water, which beads up a la perspiration.

Maybe it's just powdered coconut to enhance the authenticity of his hair?

Oh my--what a worthy champion! Just look at the shot where he's talking to the bitter old men: that is NOT a normal human head shape! That is a HAIR shape!

But I still can't believe he let his dander come THAT CLOSE to his little patriot pin. TREASON!

Like yeast-laden bread,
It rises high and fluffy.
I squeal in delight.

What magic is this?
Hair rising experience confounds.
(Fabreeze does shampoo.)

Amphibious eyes,
Hedgehog helmet hair, he asks,
"You want flies with that?"

Sorry, one more comment. I went back and looked at the former winners. One thought: How could I have forgotten James Traficant's hair?! How?!?

And one more Haiku:

Five seven five is
the meter for all Haiku.
Pony Pals take note.

Hans Wiemann sells that dandruff in spray cans. What could give a rug more verisimilitude? Where have you people been?

Salt and peppery
The salt, however, has spilled
Toss left or toss right?

to powder a donut!