Was it Good For You, Too? 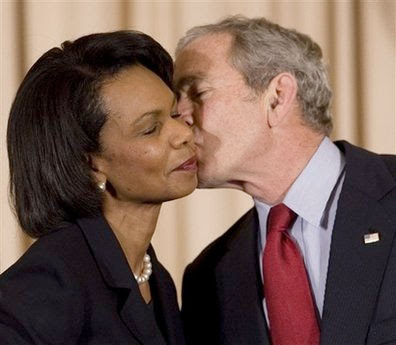 With fanfare, they walked into the gilded Benjamin Franklin Room of the State Department yesterday: President Bush, the first lady, Secretary of State Condoleezza Rice and Rice's deputy, John Negroponte. They had come to praise great people. Namely, themselves.

As one might expect of a Ceremony to Commemorate Foreign Policy Achievements of the Bush Administration, it did not last very long.

its the kiss of death from Mr. Brushcleaner, he's the man....

Perfectly illustrating why Margaret Cho once said "it was so non-consensual for me to see that" about these two.

Awww, her "work husband" gave her some sugar. That should be enough to get her justifying for years all the crud he did.

She is Rapturous. Look at that face! How did she resist the urge to quickly turn her head go for the lip lock?

Both have their eyes closed. WTF?
Oh, they're doin' it all right.
She's his Sally Hemings.

Celebrate their foreign policy? That doesn't even merit a photo op. Oh, thats right, merit has nothing to do with anything when it comes to Bush and his entire Administration.

I know someone who attended this event. POTUS kept refraining how "awesome" Condi is. Turned at length and realized FLOTUS was sitting right there and "awesomed" her as well. Was apparently under the influence - red nose, weaving stance, holding the sides of the podium to steady himself.