Rod Blagojevich: Pretty Much My Favorite Courtroom Drawings EVER 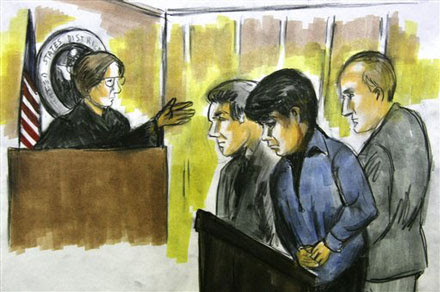 There's so much to love here that I don't know where to begin. Is it a storyboard sketch for a lost Thunderbirds episode? I also like the hammy I'm contrite posture, and wonder if he was really that obvious in real life. I'm thinking, you know, probably yes. But most of all, of course, I love the dominance of Blagojevich's mighty hairdo. Let's look at it some more: 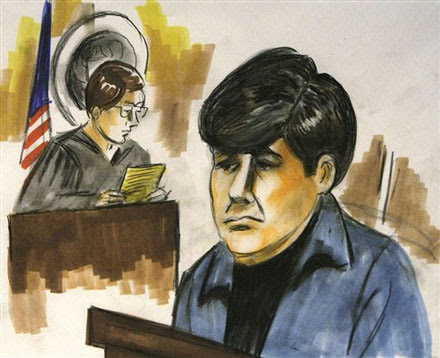 It's like the artist got dazzled by the enlarged coiffure, pulled into its vortex. I can't blame him! Me, too! Also, although the courtroom artist is not named, it's totally obviously Jack Chick.
Posted by Peteykins at Tuesday, December 09, 2008

Here's where your new hairdo obsession should be.

Seriously, though -- he looks like he could be on some bad 70s country LP cover. And possibly like my dad in a set of family drawings (I'm serious here) circa 1974.

I think he looks like a guy who could have been a concentration camp guard. And he talks like one, too.

What the heck is up with his do? Is it real? Is it a toupe? Is it a large rodent? Enquiring minds want to know.

Oh man, when I saw that drawing on Reuters...I had one thought - God, please let Sparkle Pony post about this, please..thank you.

The B man's hair is the least of his problems.
Now his best hope is making money writing memoirs from jail.

That doo is gonna turn grey right before our eyes,

aaaack!! i just clicked on your jack chick link and i could not stop reading. minus 2 points to princess sparkle pony for reminding me of a part of my upbringing which i discarded so long ago (i was a smart 10 year old)

Okay, you started it, Princess, so please help us. Forget hand turkeys. We need your vereson of Jack Chick's everyone's-going-to-hell-and-damnation captions for the fabulous courtroom illustrations.

The high density hair is not to be envied ppl. It's roots go straight through the skull to a golf ball sized chunk of grissle in the center and is the sole occupant in that space.

If he shaves his head in the big house you'll see a resemblance to every other low brow street thug on The Smoking Guns mug shot page.

Are you sure it's Chick? I could also be persuaded the artist was Billy, from The Family Circus, on Bil's day off.

Once upon a time, didn't courtroom artist actually have to be able to draw?

I understand the desire to inform us of the wonder that is Jack Chick, but the art styles look very different. This great sketch artist's name should be known to us.

As for the wonderful hair, who could not be in love with it? It's so Bobby Goldsboro or Pavel Chekhov.

Will I be able to get a t-shirt on Cafe Press with these images?

And here I thought it was an asteroid in the Gulf of Mexico that killed the Dinosaurs.

Thank Jack Chick for straightening me out!

The cubist influence is very striking, and it has a sci-fi feel to it, like a rendering of an episode from Outer Limits or The Twilight Zone.

eeww I think I just grossed myself out.

How happy I am that you have another 'do to monitor. Here's hoping he'll give us some hand turkeys before long.

p.s. What's with Tom Cruise's fucking little bangs? Every time I see a picture of him I think of zits on his forehead.

The artist spent so much time on that hair and sad face that he forgot to draw the lawyer's hands.

I have seen The Hair up close, and it does have the appearance of being quite real, although with a dry-look protective coating that shapes it into a bulletproof helmet. Seeing as The Hair went straightaway from pillow to FBI holding cell at 6AM yesterday, apparently without benefit of an hourlong heat treatment under the hard hat, I'm quite amazed to see that it emerged intact hours later (as evidenced in Chick's courtroom drawings and in the brief perp-walk video of him going home). Perhaps he wears a do-rag at night? Or maybe he maintains volume with aerogel?

Of course, G-Rod's tresses have long been a source of hairdresser fascination here in the nation's heartland of corruption. Witness this exquisite Chicago Magazine feature.

Actually, I think he's the grown up Dondi, especially since Dondi always seemed down in the dumps.

It's so Goofus and Gallant! And it teaches all us Highlights-reading kids, "Don't be like Goofus and try to pawn Senate seats!"

Blago's actually bald; he snaps his hairdo on after showering.

Perhaps he is, in fact, a ChiaPet?

blaggo is a bad character on the sopranos who gets shot after only one appearance. mon hair-do!

These look like that hilarious internet cartoon series Pathetic Geek Stories! (please Google as I no wanna linky and get teh ban.)

His hair scares me. Are you sure it isn't some kind of brain-sucking alien parasite?

Oh wait. It would prolly starve to death.

It's a very . . . Curious George (not Bush) rendition. He looks like a particularly contrite, be-coiffed monkey in that first picture. Something of the palette the "artist" is "using" reminds me of that rascal simian.

So I was watching CNN earlier, and low and behold what blog entry do I see on Jeanie Moos segment? This one! Cheers for Princess!

I agree with the post-er that said the artwork looks like it was drawn by Billy from the Family Circus, as opposed to Jack Chick. At least Billy and is family are smart enough to go to the Church that Christ actually founded, instead of making up his own and calling it Christian just for the sake of his own ideology.