Here's Your Bush Shoe. Do Not Want 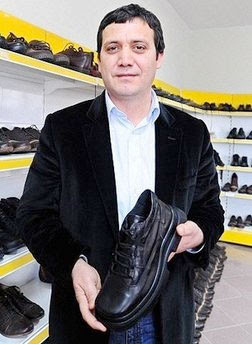 Ramazan Baydan, owner of the Baydan Shoes factory, poses in Istanbul with a newly produced copy of the shoe (dubbed "Bush Shoes") that was thrown at US president George Bush by an Iraqi journalist on December 14, 2008. The maker of the shoe has had to take on 100 extra staff to cope with a surge in demand for his footwear (AFP)

OK, so here is The Shoe. The Shoe is unusually ugly and unfashionable. The Shoe may be purchased, I suppose, as a keepsake, but do not let The Shoe anywhere near your feet. The Shoe is an eminently suitable projectile, but it is not acceptable footwear. You must resist thinking otherwise. Do not allow your mind to be clouded.
Posted by Peteykins at Monday, December 22, 2008

I think they're nice shoes! At least in a 80s Goth sort of way.

You obviously don't hang out with many lesbians.

See, the miracle of the Bush Economy really HAS created jobs! They're overseas, of course, but hey--those are JOBS!

Sorry, Karen, but I hang out with lesbians enough to know to never ask them for shoe advice.

Major exception: my friend Cathy the painting conservator is a lesbian with fierce taste in shoes.

Their principal virtue lies in their airborne capacity. They are to be worn on the feet only as long as it takes to clear security.

Lulu is absolutely correct. One has to wonder as to their balance, and aerodynamic attributes. Although from teh Utube, that journalist seems to lob them quite effectively.

(Bear in mind had he made contact, they would still be cleaning bits of him out of the carpet.)