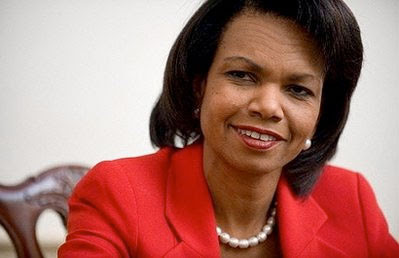 (AFP)
Check out what Condi won just for participating:

... Secretary of State Condoleezza Rice raked in at least $316,000 in gem-encrusted baubles from the kings of Jordan and Saudi Arabia alone, making her one of top recipients among U.S. officials of gifts from foreign heads of state and government and their aides in 2007.

In January, Jordan's King Abdullah II gave Rice an emerald and diamond necklace, ring, bracelet and earrings estimated to be worth $147,000, according to the State Department's annual inventory of such items released Monday just in time for Christmas.

The king and his wife, Queen Rania, also gave Rice a less expensive necklace and earrings along with a jewelry box valued at $4,630, the document shows.

Not to be outdone, King Abdullah of Saudi Arabia presented Rice with a ruby and diamond necklace with matching earrings, bracelet and ring worth $165,000 in July. The inventory also includes a $170,000 flower petal motif necklace the Saudi monarch gave to Rice in 2005, which the department says was not previously disclosed.

Kaching! And how did her boss do? Not nearly as well:

Awww. I heard something about somebody trying to give him some ugly shoes recently, but he didn't accept them. Well, don't feel bad, because they don't get to keep any of it, anyway:

Unfortunately for the Bushes, Rice and other recipients, they won't be able to enjoy the gifts as they have been turned over to the General Services Administration and government archives in accordance with federal law, which bars officials from accepting personal presents in almost all circumstances.

Oh, that just totally sucks. Just like me, George 'n' Condi can't accept gifts valued at more than $50 (intrinsic value, I believe) from clients*, which means nothing you can't afford yourself. So it all goes to the GSA, otherwise known as the gift-vacuum.

Don't the Arabs know this? I mean, couldn't they have waited until February to shower Dr. Ferragamo with fabulous parting gifts? TSK.

*The best gifts we've ever gotten in my office? Chocolate. Always, always welcome. And we're not above soliciting it from particularly needy clients.
Posted by Peteykins at Monday, December 22, 2008

diamonds are a shill's best friend.....

Did they not give her oil futures among all of those bibulous bling-blings? Doesn't matter now, though, that the price is like $40/bbl.

can I just say that I think this woman is a true incompetent. She just seems to be so... dim and completely lacking in self-awareness. All her accomplishments were as a child and she has been on the wrong side of every event and/or decision since she entered government "service".

So is there a big GSA vault where all the sparklies are kept for... posterity or whatever? Do they ever have a yard sale to get rid of some of the tacky Hummel figurines and such, or does it just sit in some Indiana Jones warehouse and molder for all time? You just KNOW there's a whole department in the GSA who live off illicit black market selling. I mean, really, who is going to notice if the gold tea set Mamie Eisenhower got from the King of Wakanda goes missing?

I also want to know about the what the GSA does with this stuff. Is it like in Indiana Jones, and they keep it in crates at Area 51? Or perhaps it's underneath some historical building, like National Treasure?

Did any other countries besides Saudi Arabia and Jordan *reward* their favorite stooges with gelt? I mean, that's a little suspicious, no?

Like many distinguished commenters before me, I am now obsessed with what happens after the no-fun patrol at the GSA confiscates this stuff. I have two theories.

1. The Return To Sender Theory. This theory postulates the Arabs are extravagant, but not extravagant idiots. The dutiful drones at the GSA return the gifts to the parties who sent them, just to show that they get no advantage from bribes and corruption in the good old U.S. of A.

2. The Estate Sale Theory. How can the most powerful country on earth really run a budget deficit for nearly thirty years? We are not being told about the GSA yard sales, where trinkets of untold fabulosity are sold off at bargain prices, which are still jaw-droppingly large sums of money to likes of you and me. These proceeds are used funds the truly mad shopping sprees the Feds indulge in from time to time, usually called "government bailouts".

I'm just jealous you get to keep a whole $50 worth of graft from each giftor.

My office puts a $25 limit on what we're allowed to keep. $25 won't even buy a small (4 piece) box of Godiva cholotate truffles!

PSP, consider yourself fortuante to have such a luxuriously high spending limit.

Actually, all Condi's booty (heh, heh) will be stored under a mountain in North Dakota where in a thousand years, after solving a series of clues, Nicholas Cage will discover it and return the USA to its former glory.

Gods forbid their Highnesses should spend the money on something silly and extravagant - like a scholarship for a disadvantaged Palestinian kid or something. I guess I should be glad they didn't use the money to buy guns for the Taliban.

I love the photos where Condi channels her inner Klingon - just check out the forehead!

All I can say, after all these years of seeing "Dr" Rice in the limelight -- what a dreadful, vulgar, and dangerous person. Just take a look at the pix provided by PSP above. She -- Rice -- could have worked for Al Capone (or indeed have stabbed him in the back to get ahead).

At my office, our public employer has issued a directive that we're not to accept ANYTHING of value from anybody.

Which is hard to comply with. Get a box of cookies in the mail and send it back? Ridiculous. We just put it on the counter and share with anyone who comes in.

Had a vendor come by with a bunch of swag like tote bags and paperweights, monogramed with his company name. I'm not going to tell him to take it back to his car.

We're supposed to give it to charity or the homeless agencies. There's a story that one time an employee's husband sent her flowers at the office to celebrate their anniversary, and the receptionist sent it right away to the Food Bank. The employee and her husband had a bit of a marital dust-up, because he felt she didn't appreciate his gift - she hadn't even known about it.

I will bring you chocolate!

You know, this chick looks great on paper. Her actions and hurl inducing butt kissy love of dubya really obliterate her impressive list of credentials.