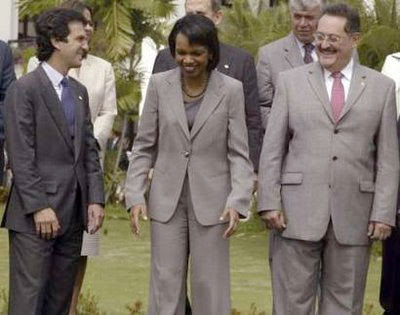 Is Condi saving all the superlatives for last? Because that is THE ugliest pantsuit I've seen her in yet. I dislike the single-button coat, the blowzy pants, ew. That is just not a good outfit.

Here's the whole group shot, and it's the cutest thing because they all had to wave:

So good. I don't know who these people are, but I want them all to be the new Devo.
Posted by Peteykins at Wednesday, December 10, 2008

Correct me if I'm wrong, but aren't she and the Hondurans Foreign Minister wearing, um, the same suit? Didn't her people coordinate with his people ahead of time to avoid embarrassing situations just like this?

God, Pony, this is one of the great letdowns in all Condi fashion history.

What happened to the Hair that Conquered Manhattan from three weeks ago? Someone call Tim Gunn.

This is why we miss Ursula so. There is no way on God's green earth she would ever be caught in something so hideously drab.

The legs on that suit remind me of Astro Boy.

Did the Lady in Red not get the memo about wearing gray? Does anybody else find it weird they are are all pretty much color co-ordinated? Just all blends in.

So kind of the People's Republic of China to make her her very own People's Pantsuit.
That color is sublime and I know it well. I call it "hairball puke."

What was that Nickelodeon show where they would randomly dump dayglo green goo on people, back in the early '80s?

It could only help, here.

With their hands raised up they all look like Lucky Cats.

Another superlative to be noted: awkward syntax. Who came up with "at a foreign, and trade and commerce ministers from Latin American nations summit" ?

I guess Lady in Red and Lady in Dress next to her didn't get the "gray pant/skirt suit" memo.

And what is WITH those crazy pants, Condi? You look like a weird kid character in a Japanimation cartoon.

Time to spice things up and get out the riding crop and boots, Secretary Rice:

Screw Stanford... Condi's going on tour!
By the way, Princess, any news of Papa Commerce Bear's beard? One can hope.

I didn't know Brezhnev's tailleur was still alive and working for the Americans (both North and South, male or female). Thanks again, PSP, for an informative posting on a little-known fact.

Whoa, Condi what up? Get dressed in the dark from someone's closet who is a size or two bigger than you are?

Oh how the mighty have fallen.

Oh no, Princess! I own a pair of blowzy pants that I adore. I only ever wear them with a form-fitting top, otherwise I get lost inside all that moving fabric.

Please tell me, are blowzy pants ok? Just not blowzy pants with a jacket like that. Pictures can be provided on request. I need your advice, I can't run around looking like Condi!!!!

In the right circumstances - and when referred to as "palazzo pants" - the blowzier the better.

These, however, were not the right circumstances. At all.