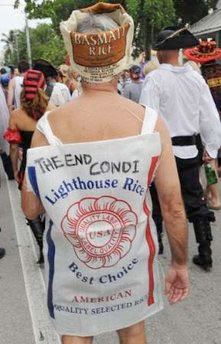 Wheee! It'll be fun when Condi moves on to become totally useless in other exciting endeavors.

I always laugh when people say, like, constantly, "OMG, PSP, what are you going to do in January when Condi goes away?" Well, c'mon, it's not like she's going to suddenly wink out of existence! She'll get a book deal for which she'll be paid an obscene amount of money, and her ghost writer will have a wonderful payday. Her book will sell more copies than will be read. The book will be incredibly bland. She'll be all over all the TV shows and magazines. I imagine she'll be invited back to a lot of the Sunday chatfests, because without Bush in office, she won't have easy talking points upon which to fall back. And I'm sure there will be plenty of that famous Condi lifestyle exhibitionism we've come to know and love.

UPDATE: Ha! I rest my case:

Bush administration officials will be looking for new jobs soon, and there’s another report out today that one of them could be headed to the NFL.

Adam Schefter reported on NFL Network’s NFL GameDay Morning that the San Francisco 49ers want to talk to Secretary of State Condoleezza Rice about a high-level position within the organization.

Per Schefter, the 49ers’ ownership believes that Rice would make a great team president and that she would be likely to help them get financing for the new stadium they want.

Rice was already planning to return to the Bay Area when her work in Washington is finished. She previously served as provost at Stanford.

Rice has also been mentioned as a potential candidate to become either the commissioner of the NFL or the head of the players’ union.

Condi will still be on the front lines after she leaves office in disgrace?
Riiight.
Just look at how any times we get to see what Madeleine Albright is up to these days.
:)

SF 49ers are about the worst team in professional football. Getting a war criminal into their organization will not help them improve.

I hope Condi gets her own talk show!

Stanford would be delighted if she would accept something with the NFL.

How about a movie career. Kind of a reverse Schwarznegger; first the neocon career, then the movie star. (Or maybe an inside out Queen Latifah.)

"As eponymous rule of the Planet Condoleezza, the authoritative woman clad in black leather defeats enemy after enemy in this mildly popular series of B movies. A trademark feature is the inclusion of other former Bush Administration cronies as sidekicks, and a thinly disguised version of Colin Hussein Powell as the arch-villain."

Is this some kind of backhanded insult?

"Former Madame Secretary, after you're done being one of the most powerful women on the planet, how about you come to work in the REAL, tough world of professional football funraising?"

Although this confirms my bias on the undue influence of spectator sports and inordinate media attention.

The Niners aren't the worst team in pro football. The Lions, the Bengals, even the Raiders show much greater suckitude this year, and the Cardinals, who are playing well this year, have had a long history of crap teams.

The Niners' fall from the heights may be the greatest, after a decade of dominance to have nearly two decades of irrelevance. The Steelers and Packers used to be in that category, but both of those franchises have come back to putting good teams on the field.

The organization hopes Condi could be a help in getting a new stadium built. Think Bechtel still returns her calls?