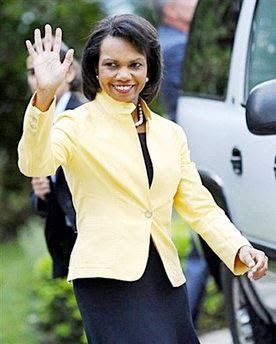 Secretary of State Condoleezza Rice, pictured on September 4, said Monday it was "unacceptable" that there were so few black people like herself in the US diplomatic corps. (AFP/File/Miguel Riopa)

I wrote earlier today about Condi's nonsensical statements about how there aren't enough African Americans at the State Department. Some readers suggested that maybe Condi should get in touch with whoever is in charge there! Ha ha!

In the same post, I solicited info from my many Pony Pals at the workplace in question, and one brave soul came through. His/her reaction to Condi's puzzling statement is in the comments section of the previous post, but it's simply too fabulous not to include here on the front page:

I won't say I'm surprised by this information, but I certainly am appreciative of the writer's eloquence! Two sparkley hooves way up AND a table-clearing swish of the combable tail.
Posted by Peteykins at Tuesday, September 09, 2008

I love it that you have all these wonderful undercover agents working on your behalf. So, the only question left....why did she say that? Oh, and what shoes was she wearing?

Perhaps she said that because she's clueless.

Do you think that maybe she brought up this whole race thing because she might be angling for a job at one of those historically black colleges? Why else would she come out as black?

Clueless Rice. This is not an issue that ethnic minorities brought to the forefront or was complaining about. It was initiated by Rice. Some folks are erroneously mocking ethnic minorities and accusing them of complaining, not excelling, or taking personal responsibility. Rice has chutzpah. I'm not sure how she can complain about "her" perceived lack of diversity at the State Department of which whe is the top administrator, who makes the decisions. Go figure. If anything, the audience should have felt belittled, beguiled, and condescended. Rice once said that she rathered be ignored than patronized. Trust me, the folks in this audience felt the same way as she uttered those ridiculous words/complaints about the lack of diversity at the State Department.

I've quoted you and linked to you here: http://consul-at-arms.blogspot.com/2008/09/re-state-department-staffer-responds-to.html

The answer is much simpler than that. "S" signifies the Secretary of State. A few of the top officials at State Dept. are identified solely by a single letter, which usually indicates their role in the Department.

For example, "M" might be the under secretary for management.