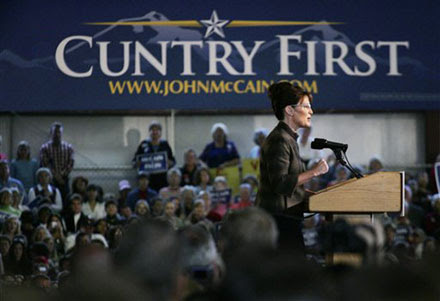 Ya know, I was always squeamish about calling other women cunts until this cunt came along.

You have to admit, though, that the "Country First" slogan is hilarious.

Srsly, the McCain campaign's legacy is that it has legitimized the use of the word "cunt."

Longtime reader here unsubscribing from PSP's feed. This goes beyond humor--into the distasteful and frankly, demeaning. I don't see PSP teasing Obama with the "n" word (and rightly so), so why is it okay to use another extremely derogatory identity-slur to describe Palin? Because you disagree with her? Oh, okay.

I'm disappointed. Thought the blog was wittier than this.

Turns out it isn't!

If Palin objects to being called a cunt then she should stop being such a cunt.
And her calling Obama "Sambo" and Hillary "the bitch" makes her a what? That's right, a cunt.

jess, McCain called his own wife a cunt in public, because, he said, she "troweled on make-up like a trollop."

Palin sure does wear a lot of foundation.

nah, i'm with jess. relying on sexism for a laugh isn't funny for me. we get enough of it from the assholes on the right and i come to PSP to skewer them for it, not to replicate it.

I'll subscribe a 2nd time (wait, are there subscriptions?).

There are two words that I am loathe to say and rarely even think to myself... the n-one and the c-one. But I don't give a bloody blue rat fuck-fart if someone else uses them ironically & for affect.

I will happily maintain my subscription and find new homes for any cancelled ones. This delightful photo succinctly sums up everything that is Palin. Can you size it to use as a yard sign?

Oh, Anthony, spare me the hand-wringing.

Just a note: some of the people who have left comments accusing me of "sexism" are coming here from "moonbattery.com", a site which has never, ever said anything sexist about, for instance, Hillary Clinton.

It's just so hilarious and unconvincing watching these Republicans suddenly "caring" about sexism. LOL.

come on now, you got a cheap laugh that some redneck in tennessee probably thought of days ago and you're gonna dig in a defend the practice of hurling sexist epithets at women you disagree with?

i don't see what good this does us.

Oh lighten up, Simon and the rest of you. I've never been a c-word user, but McFossil's the one who trotted that word out into the ether. Besides, the whole "country first" slogan is so fucking disingenuous that changing it this way isn't sexist; it's just an attempt to survive the onslaught of stupidity and assholery this woman and McFossil bring to the national stage.

PSP, you are the best. If the shoe fits, even if it is a Tory Burch, then I guess you gotta wear it. Sarah, you earned it.

Hamlet: I mean, my head upon your lap? / Ophelia: Ay, my lord. / Do you think I meant country matters? / I think nothing, my lord. / That's a fair thought to lie between maids' legs.

Anyway, the "Country" that McCain puts first is Saudi Arabia.

Blah blah blah boo hoo "cunt" is sexist. Get over it. I bet you whiners use the word "dick" all the time.

Meanwhile, not only is Sarah Palin a cunt - so is John McCain.

In the UK, this is nothing but funny.

I also liked that one of them called you "miss". I personally have trouble using gender specific pronouns when writing about or to the author of this blog, so I always just use "Princess".

On the day she was chosen, I did a weak paint program version of the sign that said "cynicism first", but obviously that did not capture the attention of moonbattery.com.

Well played, @Anonymous. Actually what I said is that I wouldn't say "none cone" which makes no sense at all anyway.

Wow, what an explosion of heartfelt whatever over a 4 letter word!

And you can see what effect political correctness has on the public discourse. Conservatives wield it against liberals, and liberals wield it against themselves. No wonder the left is always bringing a time-out stool to a gunfight when it comes to political campaigns. And no wonder the media feels hemmed in to trying to find the middle road of reportage when it's obvious that the truth is to call one side wrong and the other right.

I think we all need to take Amy Poehler up on her offer to collectively lend us a pair. Progressivism isn't about one woman breaking through a glass ceiling, and it's not about a blogger using one naughty word. It's about shutting down regressive politics and promoting economic & political rights & social justice (and all the incumbent associated issues) without stepping on individual liberties too hard. When you really put first things first, pooping on a blogger for using the c-word is way down the priority list.

A college English professor once told me that cunt was cognate with quaint. I thought that was really interesting, and still do.

At first I squirmed with annoyance and disappointment at seeing the c-word on PSP's blog. But then I remembered that "cunt" is one of John McCain's pet names for Cindy, so I guess it's appropriate.

"Just a note: some of the people who have left comments accusing me of "sexism" are coming here from "moonbattery.com", a site which has never, ever said anything sexist about, for instance, Hillary Clinton.

It's just so hilarious and unconvincing watching these Republicans suddenly "caring" about sexism. LOL."

Amen. :) Don't let those thin-skinned, squeamish, politically correct unsubscribers get to you. As a matter of fact, I will subscribe to you to make up for it because I like your style.

What is quite the ironic is how the neo-cons promote themselves as being "straight talkers". Well, they may be, but they just can't handle being the tail end of political INcorrectness, can they?

Well the nice folks at moonbattery.com sure are respectful and well spoken.

PSP, I don't stop by as much as I used to but that is a really funny pic.

(1) I'm not necessarily offended by PSP's use of the c-word, but I am disappointed. PSP's usually so brilliant that I never suspected she would even want to resort to using such an epithet. I chalk it up to a momentary lapse that shouldn't otherwise diminish my high esteem for her comedic (& fashion-identification) brilliance.

(2) Doesn't it look like Sarah's workin' on a beehive? That thought scares me. My elementary music teacher wore her beehive hairdo until about '83. She was a freakin' terror. I'm frightened Sarah might be tryin' to bring that 'do back. And not in that cool-B-52's kind of way.)

I'm with the pony on tnis one. FUCK THAT STUPID LYING CUNT! Fucking two faced whore. And to you people who dislike vulgarity. FUCK YOU IN THE ASS FUCKERS!

I sent the pic to every one of my girlfriends and everyone of those leftwing bitches loved it! Amazingly enough the rightwing nuts, not so much.