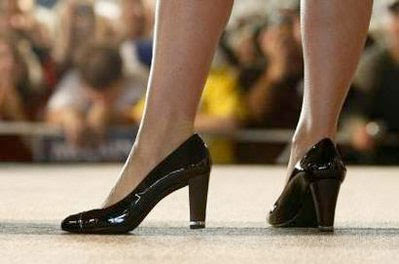 OMG, thanks, Reuters! Perhaps they heard my plea for more shoe coverage? Anyway, the other day I was sad because I wasn't able to identify Sarah's horrible red pumps, but today I can redeem myself by stating unequivocally that those are Tory Burch pumps, because that's who does the gimmicky stripe at the bottom of the heel. That puts them in the $300 range. You're welcome. I don't think those are very nice shoes, personally; they aren't fabulous. Mid-price shoes can really be a problem. 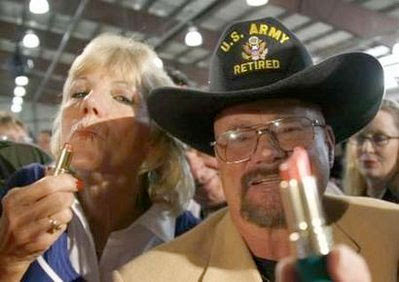 Ha ha! I don't know about you, but one of those "women" mentioned in the caption looks a little grizzled to me!
Posted by Peteykins at Monday, September 15, 2008

What interesting times we live in. Women with grizzled faces, and . . . Tzipi on track to be next prime minister of Israel! Yay!

Tina Turner wouldn't be caught dead in those shoes.

Who wears that color lipstick? Creamy coral was popular back when Gidget used to smear it on Moondoggie's collar after the sock hop.

Coming from the gravitational centre of the bear drag queen galaxy (cos you know they are all stars honey), I have a good sense that most of them have the good sense not to wear that color. Retired military girlfriend there must be a poseur, or from Colorado.

Since when did Camilla Parker-Bowles start attending Palin's hayrides?

Camilla Parker Bowles!!!!!!HAAAhhaaaa!! Now there's a drag queen I can believe in.....

Are $300 shoes really "mid-price"? Yikes! So much for thinking I made a lot of money.

That grizzly one you see in the picture is that "guy" who's always hanging out in the john at many airports in the US.