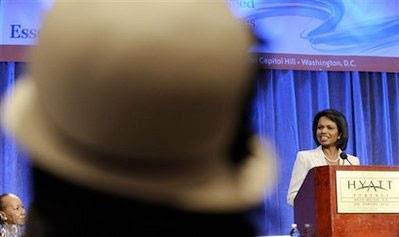 Condi spoke at a conference on African American colleges yesterday, and this was her complaint:

It's hard to know where to start on this one. Over the years I have had many conversations with people at the State Department (I'm kind of a cult figure there), and the one thing I've heard over and over is that NOBODY sees "S" (as they call her) there at all, outside of her central core of cronies and immediate support staff. She's basically sneaked in and out of there through, I don't know, an elaborate series of tubes or something. I've heard from people who have been there for years who have only caught brief, tantalizing glimpses at their beloved leader.

Condi, honey, the Department of State is located in Washington, DC. There are just, like, totally loads of black people there! It's safe to say that the housekeeping and food service staffs, for instance, are about 90-99% black people! But Condi never sees them because they are the little people.

What Condi really means is that she doesn't see "people who look like me" within her lucky, lucky, tiny little bubble of people she deigns important enough to have direct contact with her.

And, well, whose fault is that? The leadership of the State Department, perhaps?

I would LOVE to get some feedback from State Department Pony Pals™ on this one.

UPDATE: Fantastic, fantastic response from an anonymous State Dept. staffer in the comments. Must read!

Posted by Peteykins at Tuesday, September 09, 2008

"S"? For secretary? For shameful? For something scatological?

And since when does Condi ever think about anyone but Condi, much less count the African American people around her? I'm so confused.

And yet she still loves her boss George W. Bush and McSame. Maybe she ought to vote for Obama rather than McSame. Obama will bring more diversity than McSame ever will.

And yes, DC is full of African-Americans and many of them in high powered jobs. Not Secretary of State, mind you, but high powered.

"I can go into a whole day of meetings at the Department of State -- and actually rarely see somebody who looks like me."

Shocking, Condi. Perhaps the person in charge of the Dept of State should be asked to do something about this.

Who besides her would have more say in hiring Black people at the State Department?
That dame's got quite a set on her.

It might help if the political appointees/hires around her came from "universities" other that Bob Jones and Regent.

Perhaps no one WANTS to look like the good doctor. I know I don't. Even trying to sit like her would kill me.

You called it, PSP.
One could speak truth to power, but power, in this case, doesn't pick up the telephone, read email or talk to more than 5 people in the building.

Fantastic! You have done this blog a great service. I really appreciate it.

@Anonymous at the top: It has always been about her (me, me, me). As I've said before, "Rice is black. Wow. Who knew." Perhaps, she will address these concerns when she leaves her high-profile, high-visibility office. Talk about timing (lack of).

Well, it's an old story, isn't it - perhaps the oldest on Earth: The little people don't count.

Needed to solve our foreign-policy problems:

All other "non'S'" species to be strictly excluded.

he must be around 43 by now

I read through her speech. what's she means is she doesn't see anyone all day long who is dressed as fabulous as her. That's the problem with 'bringing your cotton with you to work'.

Another two cents from a State Department Pony Pal wannabe:

Beyond support staff, the department could stand to have more diversity in the diplomatic ranks. It is FAR better than it has been in the past, and there are substantial numbers of blacks in the mid- and junior-level ranks (I have more of a complaint...I am one of 35 total American Indians in the State Department...and where the hell are the other lesbians?!), but again, those are not people S sees on a regular basis. I have only seen her once here (I saw her more when I was overseas).

There is a deficit at the upper levels, and that is indicative of the nature of promotions and the fact that the folks who have been in the longest are white men. In fact, up until 70s, women in the Foreign Service had to resign once they got married (Guess I'd have been safe on that account, since the Department still doesn't recognize my marriage, but then, I'd have been unlikely to get a security clearance).

Well, for one thing - she apparently is the most traveled SecState in recent memory. Somebody is actually tasked to compute how many miles she traveled every month, wow - that must be a great job! In any case, how is she going to see more folks like her if she is buzzzzy conducting shuttle diplomacy from all ends of the earth. Wait, does that mean, her staff that travels around her are all white? And why is that? Are they all white up on the 7th Floor Heaven, too, except her, that is? Tsk! Tsk! Confusing, very confusing; and here I thought State is one of the most diverse organizations out there!