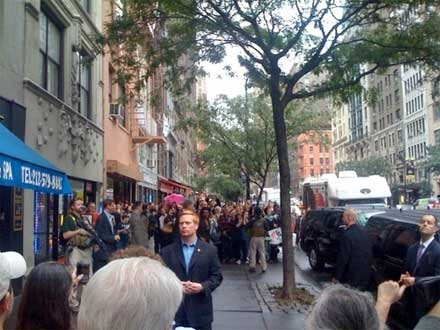 (Photo via Gawker)
Wait, Condi goes to a storefront nail salon? It's all true:

Just this morning, Secretary of State Condoleeza Rice was talking to the Associated Press in New York about the frustrating ongoing negotiations with Iraq regarding the governance of U.S. soldiers deployed there. How to top that off? From a reader: "Condi Rice is getting her nails done RIGHT NOW at Lovely Tender nails on w 72nd street between columbus and amsterdam." Do not approach! Secret Service will frag your ass! Update! Commenter Clarence Rosario sends photographic evidence (after the jump), and notes, "We boo'd her pretty soundly."

New York is always trouble for Condi! Don't forget that it was also (erstwhile Sparkle Pony employer) Gawker which reported the famous Ferragamo incident.
Posted by Peteykins at Sunday, September 28, 2008

Oh sweet jeebus on a waffle, you could not make that up!

You know, I would think she could find someplace where an actual appointment would be necessary and where she would have to pay more than $9 for a manicure.

Has the economic crisis hit Condi too???

congrats on the scoop!!

Scoop? It ain't my scoop.

Just because the economy is in the toilet is no reason to go around with nasty cuticles. I got my nails done yesterday, too. It doesn't mean I don't care.

She can't have someone come to her to do her nails?
Hmm. Maybe her 401k has tanked like the rest of America's has.
Can Sears couture be far behind?

Count the Secret Service agents mulling around on a Saturday waiting for Condi. Figure on $35 per hour, times four guys, plus gas and other transportation costs for the motorcade...And that bitch can't call someone to her home to do it for $50?
Gimme a wood rasp and some kitchen shears, I'll do her damn nails for her.

Nothing like messing with the ebb and flow of the great unwashed and their puny little lives by dropping an SS team and some assault weaponry (dude under the blue canopy) into the main stream just for some trivial elective cosmetic procedure.

I hope an unsecured potted plant doesn’t drop to the street. The ensuing carnage would be indescribable as the crowd was tasered/gassed and beaten into submission as Condi was “extracted” from the shop whilst administering torso/head shots to the screaming customers.

Has Condi ever heard of a nail clipper?

Did it ever occur to any of you Condi Critters that Madam Secretary just wanted some digital succor from all those nail-biting diplomatic struggles she's been engaged in so carefully documented on this very site, huh, did it???

But did she tip?