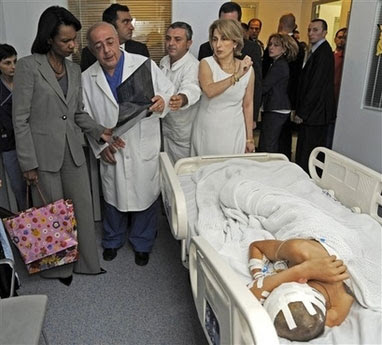 Condi and her gals 'n' pals 'n' photographers visited some hurt soldiers today! What a great honor for them! And it's all very interesting and stuff but –hello?– what is that bag? Does anybody know? Is this the kind of bag America's Princess Diplomat should be carrying? Is Condi knocked so sideways by the Russia/Georgia thing that she absent-mindedly wandered into a Hot Topics and purchased a Paul Frank tote bag?

It's OK, I guess, because otherwise Condi looks great! Vacation served her well. Her hair is structurally sound and her flesh looks more convincingly lifelike than ever! Here she is with another grateful hospitalized person: 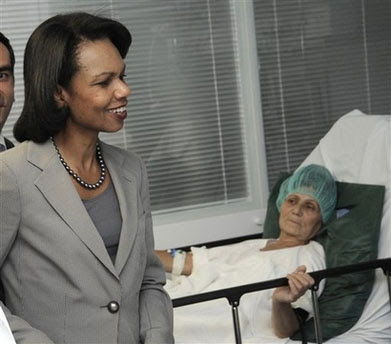 Yes! Ladies and Gentlemen, it's the Condibot! Ha, ha! The real Condi is still on vacation somewhere! Fun!
Posted by Peteykins at Friday, August 15, 2008

'Bot-i-licous! I think somebody got her some groovy Georgian gifts 'n things and that is why she has that kicky pink shopping bag.

That smile is very sweet, so therefore cannot be real. The woman in the hospital bed sees that something is amiss.

Her talking points are in the bag.

She is wearing out those black Manolos. And she seems to be sporting a $15,000 necklace.....hmmm. But maybe it just IS the Condibot dressed in Armani, Blahnik and Mikimoto.

Forget the bag--her pants are so long you gotta wonder if she bought them off the rack at Ross Dress For Less.
And why the hell is she looking at an x-ray?
"Yes, I looked at Gregori's films and I have to say, my prognonis is guarded."

That bag is full of ripe peaches, fresh for the distributing, Princess. You know the Georgians love their peaches!

That title is genius, but do correct the "Wonded" typo for posterity's sake.

Ha ha, SFMike, I just noticed that this morning and totally cringed.

I'm sorry, Princess, but I would have to argue you're simply trying to scare Americans with your color coded alert graphic for Condi's hair. Condi's vacation has most definitely relaxed her hair to BLUE or "GUARDED" from YELLOW or "ELEVATED." Are you just playing POLITICS with her hair and trying to scare the American people into voting for McSame? Condi's hair is serious business! Structurally sound? Yes, but I would argue something could happen, especially on the flight back home, and it should be GUARDED!

Sorry to have to point this little unappreciated fact out, which you consistently fail to acknowledge, btw, but our beloved Secretary of State, Condeleeza Rice, should also be properly referred to as, Doctor Rice.
I might remind you that the late, beatified, soon to be venerated, St. Timmy of Buffalo, never failed to pay her that titled homage and respect.

It is plainly obvious that even the Georgian doctor recognizes Dr. Rice's distinctive appendage and is earnestly seeking her professional second opinion on the Xray before them.

Could it be that that "weird bag", as you put it, is in reality, only just her unique low profile, doctor's satchel containing stethoscope, head mirror, scrubs, and ace bandages in case she was called upon to go in?

Do you not remember the "humanitarian aid" that the US is providing Georgia?

Well, I know one thing: if I have to wear an aquamarine hair net, no way am I going into a hospital in Georgia.

Even if, given the state of my health insurance, it is the only available choice...

It must be nice to know that your abject misery provided Dr. Ferragamo with a photo op.

What's the doctor doing--showing the Doctor his chart?