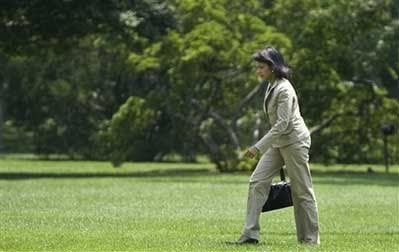 Secretary of State Condoleezza Rice, walks on the South Lawn at the White House after arriving with President Bush, not pictured, Sunday, July 13, 2008, in Washington. (AP Photo/Manuel Balce Ceneta)

Such a bargain! The Sunday Times (the Teabag one) reported this li'l chestnut yesterday:

During an undercover investigation by The Sunday Times, [Bush flack Stephen] Payne was asked to arrange meetings in Washington for an exiled former central Asian president. He outlined the cost of facilitating such access.

“The exact budget I will come up with, but it will be somewhere between $600,000 and $750,000, with about a third of it going directly to the Bush library,” said Payne, who sits on the US homeland security advisory council.

He said initially that the “family” of the Asian politician should make the donation. He later added that if all the money was paid to him he would make the payment to the Bush library. Publicly, it would appear to have been made in the politician’s name “unless he wants to be anonymous for some reason”.

Payne said the balance of the $750,000 would go to his own lobbying company, Worldwide Strategic Partners (WSP).

Asked by an undercover reporter who the politician would be able to meet for that price, Payne said: “Cheney’s possible, definitely the national security adviser [Stephen Hadley], definitely either Dr Rice or . . . I think a meeting with Dr Rice or the deputy secretary [John Negroponte] is possible . . .

I bet if you make it an even $1 million, they'll guarantee full release.
Posted by Peteykins at Monday, July 14, 2008

It's fabulous and fabulously legal!

That's worth being close enough to kick them hard in the nuts. Let's hold a bake sale.

Do let's hold a bake sale, and ask PSP to wear his acid green Hushpuppies to the nut kicking event.

Isn't that Crazy Eyes' pantsuit? Are they sharing outfits now?

What about mowing the lawn in exchange for a meeting with her?
It could be great for both.

I'm sure they would love this!

That has to be one of the most awkward gaits I have ever seen. I think the animatronic Condibot® needs some graphite on its hip bearings.

Magase,
I award you the gold medal for the absolute best PSP kiss-up ever.
That must have taken you DAYS to Photoshop.
Bravo!

Karen,
I know, and I hate kissing up.
But, you know, I'm so grateful to PSP. Since I found out that someone's keeping track of Condi's hairdo, I can finally enjoy my spare time.

Let me be third to say it, but that was brilliant work, magase.

I was going to make a crack about how much to meet Dana Perino nekkid, but at these prices she's just not worth it.

Magase, oh I know.
I am not usually a kiss-up, but once several years ago PSP left a comment on my site and I was kvelling for months.
If he linked me, I think I'd need CPR.
Daily.

Nice kiss-up, Magase--beautiful work! And check out the subtle response/kiss-up work of the ZipDrive!

And this ridiculous sum goes where? "about a third of it going directly to the Bush library" and the rest to this idiot's slush fund. Wow, I love our political/legal system.

I wonder--how much for a meeting with PSP?

I feel stoopid. What does "The Sunday Times (the Teabag one)" mean ? British Sunday Times or New York? Why "teabag"? Reference to John Waters's 'Pecker'? I'm confused. Help!