It Must be True; I Read It in Pravda! 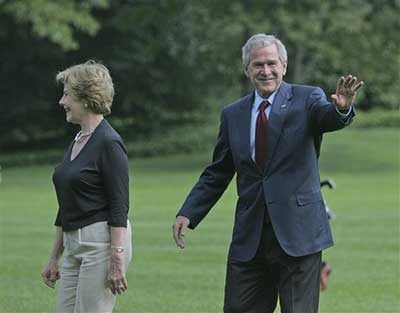 President Bush waves as he and his wife, first lady Laura Bush, walk to the White House upon arrival on the South Lawn of the White House in Washington, Sunday, July 20, 2008. (AP Photo/Lawrence Jackson)

It's been a while since we've had Bush/Condi/Crazy-Eyes love triangle rumors! Maybe because the very idea makes people vomit? Perhaps the visions of cast-aside pantsuits are all too much? Yes, yes they are, but that doesn't stop Pravda from cobbling together a wonderful article which shows their unique talent for running with Chinese whispers and vague sources. Enjoy!
Posted by Peteykins at Monday, July 21, 2008

Oh that article was dee-licious!

I love the way it wraps up, don't you?

“She's a superfecta: a Republican, a woman, an African American and secretary of state," he said. "I don't think there's a hotter star on the Republican political horizon than Condi Rice,"

Seriously, that article was chock full of fun, evil tongues, the choice to spell Mayflower May Flower and so much more.

I did need the levity because if I spent more than a nano-second thinking of those two doing it, I would do more than vomit.

After that, the successful candidates for higher office get a little sparse.

I also love that they give direct attribution to Wayne Madsen, who says he knows what Bush told a psychologist.

1. How would he know?
2. Who can believe Bush would see a psychologist?

And everyone knows that the No. 1 conservatives look for in a presidential candidate is that she be a black woman.

Laura Bush has fashion input from anyone she wants, pretty much, and still ends up looking dumpy. How is that possible? Get Tim Gunn to the White House, for heaven's sake. He's from DC, he won't mind the heat this time of year.

Why not take it up a few notches.... IF Condi and George are boinking, could that be what the Book of Revelations meant when it talked about the whore of babylon riding the beast?
You better start a blog to monitor Condi's mommy belly for unwanted love- child insurgency.

"...Bush confessed during a session with his psychologist..."

Okay, first things first.
Who hid first base in the back of Laura's pants? That's one hell of a ba-donk-a-don't.

Next, as much as I'd love to believe Bush was shtupping Condi, there are a few issues that might negate the delicious possibility:

1. Condi is a big old lesbian.
2. Southern Republican men do not like to screw fancy, educated African American ladies; they prefer minority housekeepers and daughters of gardners and other service providers.
3. Bush is obviously not interested in sex. If he had a normal sexual appetite, he would not be as prone to war and mayhem.
4. Bush knows his mother would murder him in cold blood if she knew he was wasting his blue-blooded seed on 'one of those people.'
5.

Karen, first of all those are attends undergarments, not first base.

Next, since when have facts had any relevance
to anything?! We're all supposed to only process
those "issues" which affirm our pre-conceived
notions. Anything else is dismissed summarily.

Karen Zipdrive, you really should start your own blog. You have a brilliant sense of humor of reality.

On that being "first base", I would want to trust, but verify.

Me thinks she left her sweater in the dryer to long

I have my own blog, silly. Hence the big blue hyperlink.

Usually i don't comment , but is it my imagination or did she purchase a second hand outfit ?

it looks like it came from some charitable association.

I'm with Karen Zipdrive. I can't see George Bush having an affair because he doesn't strike me as being sexual at all. Funny, for a narcissist and an egoist, but I get zero sexual radar from him at all. At least to women.

I hear there is a rumor going around that Michelle Obama is very, very upset over the discovery of a series of “hot” email and text message exchanges between her husband and Condoleeza Rice, indicating that Obama not only intends to install her in his cabinet after the election, but in his West Wing bedroom as well. Precise details are unavailable, except that bondage fantasies, something Ms. Obama would understandably be resistant to, are involved. Of course, nobody will admit to anything about this on the record, but the extremely salacious nature of the story makes it hard for even Washington insiders to keep completely quiet.

In a way, this is no surprise. It would certainly complete Obama’s swing to the right, something many men undergo in their forties, changing spouses as well as political direction. Wasn’t it Winston Churchill who said, “Any man who’s not a radical at 20 has no heart; any man who’s not a conservative at 50 has no brain”?

Well, we can argue about what “conservative” really means. Certainly the Bush junta, which has wrapped itself in a “conservative” mantle, has taken the US in a number of very radical directions that, considered outside the realm of political labels, have nothing to do with conserving anything except the wealth of the already criminally wealthy. As for me, I have no problem identifying myself as a conservative in the most profound way. We have no other planet to live on and nobody else to live with, and I am intent on conserving the planet and finding a way for us all to get along in order to do so.

Back to what’s really important: Obama and Condi an item? Will truth be stranger than fiction? Is it possible that, while he doesn’t want to prosecute her for her war crimes, he wouldn’t mind locking her up and whipping her for them?