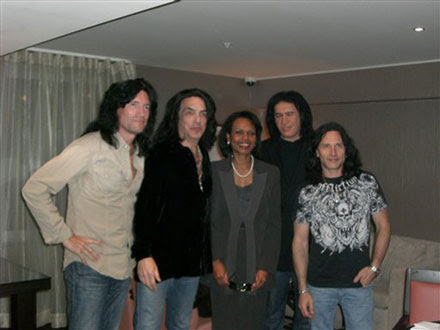 "It was really fun to meet Kiss and Gene Simmons," she told reporters, noting they seemed well informed about current events. The band had asked if she could stop by after she finished dinner with the Swedish foreign minister and Rice readily agreed, she said.

Simmons and his crew, who are on a European tour, weren't wearing their trademark stage makeup, but were recognizable as rock stars to even non-fans by their hair, according to State Department officials who were with Rice.

Rice, a classically trained pianist, said she has eclectic musical tastes ranging from Beethoven to Bruce Springsteen. Hard stadium rockers like Kiss are included in the mix and Rice said her favorite tune of theirs is "Rock and Roll All Nite."

Thanks to Sara at Wonkette and many others for the tip.
Posted by Peteykins at Friday, May 30, 2008

Condi in Kiss makeup? I'm picturing it now... What would her Kiss character be? hmmm... Space Ferret? Shoe Lady?

She's like the hardest-working Secretary of State in the world!

Only, yeah--she's not actually working.

Perhaps RandiBeans was there to take pics? And maybe Madame Shoes will get Hadley to post 'em on her Flickr site! Troll those interwebs, Princess!

Did she show them everything she got? I hear that's quite a lot.

Wired has a photo. Sadly, none of them are wearing KISS makeup.

Got it, addict. Thanks for the heads-up.

What's with the matching black mops?

Gene Simmons is trying to look down her shirt. That's about as sad as when he came on to Terry Gross.

Who are these dreadful, low-brow people, and what are they doing appearing with the Secretary of State of what was once the world's greatest nation?

OMG, the thing with Gene Simmons and Terri Gross is one of my favorite things ever.

Just showing that I am NOT a member of Kiss Army, never was an never will be, a picture of KISS and Condi together reminds me of a lyric by Elvis Costello.

This does NOT rock!

That's the best use of an Elvis Costello quote I've ever seen, matty. Bravo.

I had a KISS lunch box.

Oy vey, that blue-black hair!
They all look like middle aged ladies on their way to a Hadassah brunch.

Gross! Gene Simmons--perfect match for Condi. I wonder if he showed her his tongue? My fave is his interview w/Terri Gross, too.

"Gene Simmons is trying to look down her shirt."

He won't see too much.

So Condi gets on the phone and asks her staff to come up quick with her 'favorite' Kiss song.

We all want to see that.