Eugene Robinson Loses It for Condi 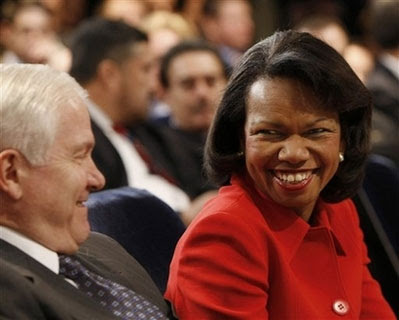 Eugene Robinson is all wound up over at the Washington Post about all the Condi Veep rumors, poor thing. He kinda wants it to happen! Well, sort of! But not really! He acknowledges that it'll never happen, hints that it would be a really, really bad idea, but OMG, would it be entertaining:

And, as a bonus, there would be the piano recitals, the early-morning workouts, the skybox appearances at football games, the impromptu lectures on Russian history (in Russian), the daily fashion show. . . . Pleeeeeease?

Oh, Eugene! I know exactly, exactly how you feel! Exactly! And I hate to crush your (and my own) dreams, but I hope this is unequivocal enough:

"I don't know how many ways she can say no," said State Department spokesman Sean McCormack of reports that Rice is actively campaigning to join the Arizona senator's ticket.

"She has got to finish up her work as secretary of state and then head back out West ... to go to Stanford. Remember, she is still a tenured professor at Stanford and only on leave from Stanford. She fully intends to go back," he added.

OMG her broad smile is worse than her scowl!
I mean, seriously, cover her mouth with your finger and check out those evil eyes!!

She's so smiley lately! I think it may be that Tibet managed to get into turmoil without her even having to leave her armchair.

OMG...I ususally don't comment on Condi's looks, but she is fugly in this picture, even with airbrushing. I know she looks better in person. Shame on the photographer. Honestly, I've never understood why people described her as "beautiful," "attractive," etc. Sorry to be so shallow and sexist.

On a more serious note, if Condi doesn't return to Stanford this year, she will lose her tenure and position. I'm not sure why this is important to her, considering that she could get a position anywhere as university president, CEO of a multinational, or any position that she wants.

I think she will return to Stanford for a year to recompose and reset her leave of absence that universities' allow tenured faculty for government service, and then, go back into government, probably a run for governor of California.

I strongly suspect that a lecture by "Dr" Rice in her "Russian" would be near incomprehensible -- to both Russian and English speakers.

"It would be a difficult transition for the American public to watch her run for office," says Sonya Hamlin, a New York-based communications expert who advises political figures on style and presentation. "We have always seen her as Bush's handmaiden, reporting back on the serious issues from Iraq and the Middle East, and never really heard her individual voice.

"She has always looked and acted remote, smiling in a way that says, ‘Keep your distance and don't come any closer,'" continues Hamlin. "You can never teach someone to act warm or folksy, because it has to come from within. She'd be better off going back to teaching or consulting in the corporate environment or with large charitable organizations."

In this age of universal fraud, Over-cooked Rice (as she looks in the above picture) is a perfect candidate for any "important" position. But she still would be best as a finalist on "American Idol."

What's with all the anonymous comments?

The scary thing is that whenever people keep saying no, in colorful ways like "I don't know how many ways she can say no," it almost always means, "Not yet, let me get my story worked out first."

Talk about an "oh shit" moment. McGeeze and Lecondel. I think I just peed my pants.

"fully intends" is such a weaselly phrase isn't it? what ever happened to "is going"?

I hate to see that f*cking witchtard laugh when people are dying all over the place.

Witchtard?
Fabulous!! I am lifting Princess Sparkle Pony's glittery hooves and clapping them together in applause.