The Youth of Lebanon Salute Condi! 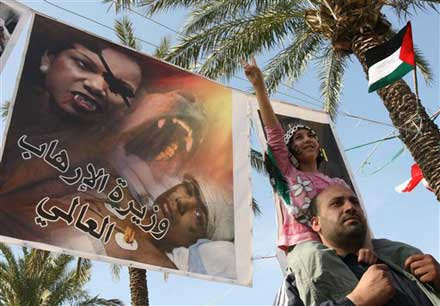 A girl flashes the victory sign as she sits on the shoulders of a man in front of a picture showing U.S. Secretary of State Condoleezza Rice with a writing in Arabic that reads:" Minister of international terrorism," during a Lebanese and Palestinian protest denouncing the Israeli attacks on the Gaza strip, in the southern port city of Sidon, Lebanon Friday, March 7, 2008.(AP Photo/Mohammed Zaatari)

That Condi...quite a role model, you think?

Actually that new set of pre-molars does her a favor as it brings attention away from the Alfred E. Newman-like gap between her front teeth.

The eye-patch is also a nice addition to her overall facial appearance; she somehow looks less reptilian with one of her eyes covered.

And the creature on her left (is it a horse?) seems like the perfect date for our dear Secretary!

This picture, in sum, really does depict an ideal, all-American couple, the kind of wholesome guests so sought after for Republican fund-raisers.

As for the heavenly light at the upper right, it proves that God is on Condi's side, illuminating her with Her wisdom and grace!

See? This is why the Palestinians and the Israelis don't get along.

The Israelis believe she lecondels all day getting nothing done and the Palestinians believe she is actually responsible for some shit.

Once they come to terms on the whole 'what does Condi do' question, could peace be far behind?

Wait. I thought Condi was a Lebanese.

Holy Slayer, Princess, this is one frightening image--Condi as vampire.