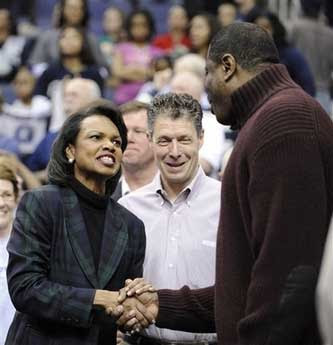 Condi had a sports day yesterday! That's a good thing, because the past seven days have been just awful for the poor, under-appreciated diplamazon, as you'll see in this week's Condi Roundup when it's up (EDIT: It's up!). What the heck is she wearing, though? A tartan blazer? Oh, no, Condi, no.

Sensing the horrible fashion error she was committing, a helpful furry in the crowd came forward and offered Condi a coverup: 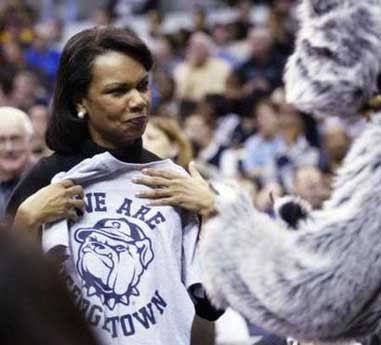 (Reuters)
That's better! And speaking of coverups! Tomorrow, the long-awaited The Commission comes out! If you haven't read last Friday's excerpt yet, do so now!

And finally this morning, I wish I could show you a picture of Helen Thomas impersonating Condi at Saturday's Gridiron thingy, but, alas, apparently the spectacle was too frightening for photographers to document. I do, however, have a photo of Condi's interesting outfit: 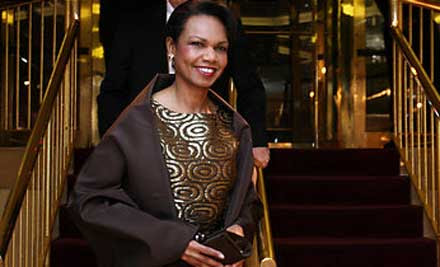 If only her life were limited to watching basketball, just think how much better off we all would be...

Gridiron outfit! Is that Patrick Ewing's jacket? It sure doesn't fit her! I think she only has to put on the helmet, and then it's time to say "I... AM... IRON MAN!"

Looks like she put on the fancy shower curtain AND the plastic liner.

That bulldog T-shirt was mean. She doesn't have an underbite.

Condi gets fashion tips from a furry! For great lulz!

Last pic makes it clear that Condi's skin troubles are mysteriously back. Perhaps her professional Photoshopper got fired.

I like Condi's sparkly cinnamon bun top. Needs icing, though.