Tribal Leaders Try for a Luv Connection with Condi in Ghana 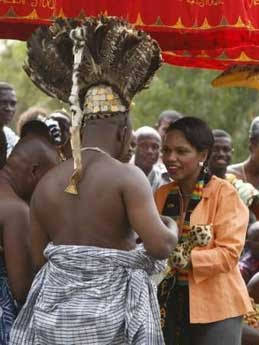 OMG, hello, big boy! This trip to Africa sure is a lot more fun than the last one, but mostly for us, I think, not Condi. Notice how she left the expensive Chanel sunglasses safely in her room for this encounter? 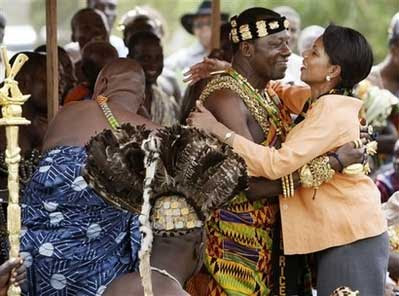 Secretary of State Condoleezza Rice, right, who is accompanying President Bush, not pictured, is embraced by Emmanuel Oti Boateng, a tribal leader, after being briefed on the USAID West Africa Trade Hub, Wednesday, Feb. 20, 2008, at the International Trade Fair Center in Accra, Ghana.(AP Photo/Charles Dharapak)

Yay! Cuddles 'n' hugs for Condi! Later, free of the tribesmen's grasps, she apparently burned the now infected clothing and phoned a pal to recount the traumatic, hairdo-threatening experience: 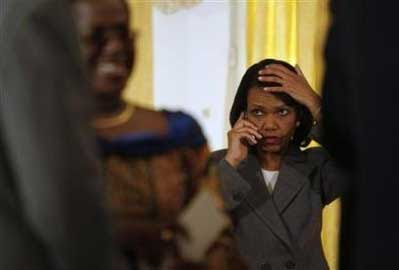 Wheeee. Condi, finally got her African Prince Charming. She has always said she prefers black men. Wonder when they will "jump the broom." Maybe, she and first daughter, Jenna will have a double wedding. Not sure how her husb-- and wife in California will feel about her Nubian Prince. Verification word: polygamy.

Love the Kente scarf around her neck. Condi, bring me one back!

But wait! Condi's hair looks pulled back or something in the photos with the big burly men hugging her and giving her phallic objects. Then when she's gossiping on the phone, it's down again. What does this all mean???

"You had me at shaka zulu!"

There was some soap star who posed naked in traditional tribal attire... what's the chance that Condi will? Anybody know if Hef's contacted her.

Also, in that last picture on this post (look at it now) you can tell it was windy. Condi is having to hold the wig down!

Is it my imagination or has Condi had some dermatology work done? The facial moles, veins, and hair follicle shadow are not visible in current photos. The eyes seem larger, the gap between her teeth is smaller, and the gums are less dark.

In older photos, there are moles, veins, and hair shadow present on the face; the eyes seem squinted; the gap between the teeth is larger; and the gums are darker.

Do you think the photographers are photoshopping these minor flaws out of the photos? If they are, they are very talented magicians!

If the "encounter" with Oti Boateng isn't enough to raise the hairdo alert to high... then nothing is and the entire system should be dismantled.

Lecondel: "Randi, honey, it's me. You will not BELIEVE what I just had to endure!"

Lecondel: "I had to TOUCH BLACK PEOPLE."

That middle photo guy, Emmanuel Oki Dokie, has on more bling than Diddy and Shaq at the pimp prom.
And look near his waist! He had his servants make him a special penis holder with Condi's name on it!
Egads! I bet she bathed in Purell later that night.

Thats the closest her body has ever been to a Black Man's body or maybe any man.I bet it took a lot of control not to throw up!....."Not that theres anything wrong with that"

Omigosh dguzman, you're so on point. Even though Condi had to endure racial segegration of sorts when she was growing up, she had no qualms agreeing to the discrimination of Israeli officials during the Annapolis conference. The Arabs insisted that they will not tolerate Jews using the same entrance as they so America made the Jews enter through the service entrance so that the Arabs will be happy. And I'm not even talking about Israeli office boys, I'm talking about Condi's own good friend, Tzipi Livni, the Foreign Minister of Israel and chief negotiator for Israel in Annapolis. Tzipi was magnanimous enough to not kick up a fuss over that but she certainly had had it when the Arabs refused to acknowledge her existence there and refused to shake her hands, like she was invisible! Condi, how could you have condoned such a thing.

Tikky,
What a great anecdote. Seems to me they should have made the Arabs use the service entrance.

And PSP, I think the hair situation with Condi deserves a little more consideration.
Women usually pull their hair back when it's dirty or otherwise not up to par.
I think Condi just didn't give a damn because, after all, she was just meeting a bunch of savages.

Wow, Tikky, I had no idea this had happened. But I'm not at all surprised that Condi went along with that crap. I hope Tzipi makes Lecondel use the servants entrance next time Condi decides she needs to go shop in Israel again.

My love connection is so bad, I was up until 3 am this morning watchin' Barry White videos BY MYSELF. True. Sad. Sad but true.

-- I'd rather not sign my name to this confession.

Lawd have mercy..poor Condo..she must of been a wreck when she finally got free of the big guy with the huge smirk on his face.