Everyone Knows it's Windy 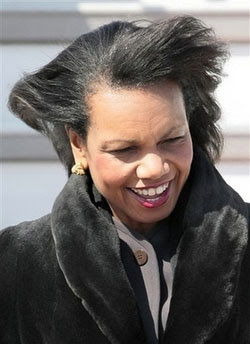 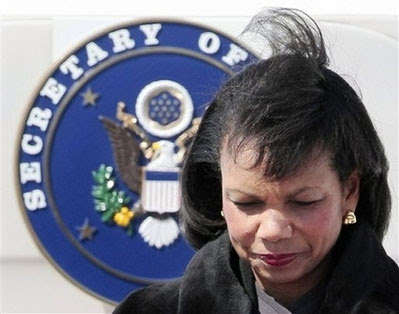 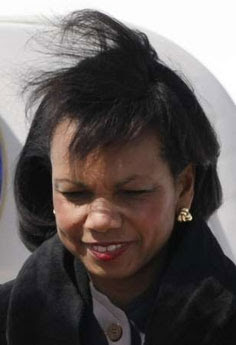 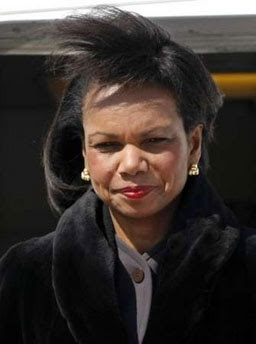 And to answer the inevitable OMG WHY HAVEN'T YOU RAISED THE HAIRDO ALERT LEVEL???!!! comments, later photos demonstrate the gusty winds which greeted Madame Secretary abated once she was indoors, and the coiffure's structural integrity was recovered by a crack team of Japanese hairdo engineers. Look, I know it's fun to play with the Condoleezza Hairdo Alert System, but it's a tool, not a toy.
Posted by Peteykins at Wednesday, February 27, 2008

PSP, I know how seriously you take the hairdo alert system, but please consider this:
If even one other person plans to use these hilarious photos, thousands will flock to your Blog expecting to see a High Alert.
And they won't.
And it's sad, very sad. :(

If you look at the terms of the CHAS, the meanings of each level are clear. Gusts of wind NEVER merit a high alert, unless they were, say, gusts of wind containing an epoxy spray.

Princess, I admire your restraint and your integrity re the CHAS. While I would love to see the alert levels change like a stoplight, I will respect your wishes not to alarm the public.

The CHAS is supposed to keep track of overall trends, not hour-to-hour conditions, just like the Homeland Security thingy. If it were a "live updated" kind of thing, I would have raised the alert for the 120 seconds during which she was leaving the plane, and then lowered it after it was fixed.

I do think the extraordinary nature of the Secretary's hair upon her windy arrival in Tokyo calls for the urgent creation of a new category for your wondrous hair alert system, which I follow religiously day by day to assure my total security in die homeland, despite the fact that I am totally bald.

How about a "I'm tired of seeing the same old earrings and shoes" alert system? On second thought, it's the only way I recognize our inconsequential Sec. of State.

Are we sure this is from wind?

I too check daily (oh, okay, loser that I am, thrice daily) for any changes in the alert. While I am thrilled when there is a change, any change, I will respect your rules. Having said that, these photos were hairlicious! Finally - when you speak with her, please inform her GOLD earrings are not to be worn with grey-ish clothing.

I totally think that Condi needs to rock the fauxhawk look more often.

If she has black hair is that first photo "Flock of Crows"?

Are these pictures of Dr. Condoleezza Rice or Dr. Nina Simone? Both are classically trained pianists.

OK, how about a hair alert widgit.

like the one that says abe vigoda is still alive.

Cannot help but comment at the utter pretentiousness of the seal behind the Wind-Blown-Hair One (WBHO): "Secretary of...[State]"

Is this the way to impress "furreners"? Through imperial displays of fancy jet-power?

The appropriate tag for this third-rate mind should simply be "secretary," i nichevo bol'she.

Indeed, when one thinks of the pix of Condi as an A-A Lolita (in her biographies) lounging on the hood of a RR (or some other "classy" Brit car, can't remember which) -- it all makes sense:

It's all a search of her huge, fragile ego (but mediocre mind) for shallow fame, "making it" American-style.

Where "Dr" Rice properly belongs is on "American Idol" Tee-Vee, not formulating American foreign policy -- as if the Bush gang cared (it never did) about "diplomacy."

Indeed, this is why she was "chosen" by the regime: because she is an utter provincial, incapable of challenging Dubya's "mind."

PSP, I guess the wind exposing Condi's thatch of gray roots still doesn't rate another notch in the CHAS, huh?
That's okay. I still have Chris March's human hair couture from Project Runway to amuse me.

I am a huge fan of Dr. Nina Simone, who died in April 2003. She should have been the first Black classical pianist. In terms of personality, politics, identity, and music, Dr. Simone was the diametric contrast to Dr. Rice.

Dr. Simone's music and voice are incomparable. She loved Bach. You can often hear Bachian fugues and riffs throughout her piano playing of other genres of music. The timbre of her voice is rich and passionate, rarely unresolved.

Dr. Simone was actively involved in the Civil Rights movement, and for this involvement, her music career was affected negatively in the US. She has a daughter whose stage name is "Simone," who recently sang her mother's songs in New York in honor of her mother's birthday, Feb. 21st.

Condi Rice is no Nina Simone. Rice is passionate without resolve. Simone was passionate with resolve and fully engaged with life and music. Rice finds music challenging. Music was the center of Simone's existence.

Both are eccentric, attractive women who happen to be African American and was introduced to music very early in life. Both are admirable women to me in their own rights.

This has been a moment in American history during African American month. You're welcome.

I LOVE Nina Simone, and have all her LP's,,,she is no condi rice

What Zoe said. Although I'd like to thank you for the history lesson, anonymous, Condi Rice is the absolute antithesis of Nina Simone. Ms. Condi sold her soul to the devil and that's what Ms. Princess Sparkle Pony has been documenting in absolutely rigorous detail for the world's fascination. Nina Simone did not sell her soul, and paid the price for that. End of story unless you believe in reincarnation, which I do.