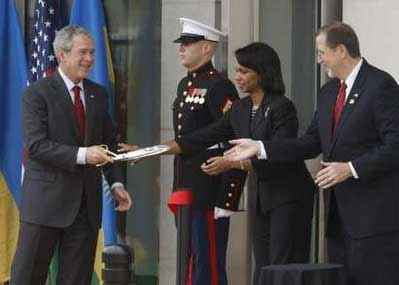 Look at the poor marine. He looks like he's moved his junk away from those scissors lest Bush accidentally nicks his nuts.

But that old white guy looks like he's trying to steal them from her! Kill him!

Dr. Diplomat looks as if she is hydrating her lips as she receives this phallic object from her husb--.

The freaking moron pResident doesn't even know that you hand scissors to people HANDLE FIRST. Bab's must have been the worst mother evah!

Bush has at last found his Weapon of Mass Destruction and can't wait to try it out on Rice, just for fun...

well, lookee here. something else dubya's mommy didn't teach him: how properly to hand a pair of scissors to someone.

OK so maybe she did tell him, but he didn't listen.

Condi totally should have gotten that young Marine accessory instead.

Hey, that's so true about the proper way to hand off scissors.
I'm pretty sure old Babs taught him to do it that way.
As I've always said, when the bitch is defective the pups come out goofy.