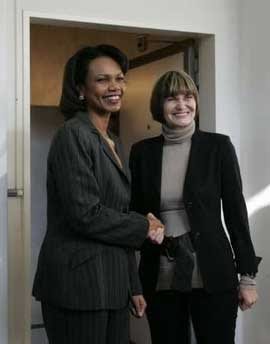 Woo hoo! It's Micheline! I tried so hard to make Micheline a blogstar, but she's just so... well, so neutral. But still, it's nice to see her again! Also, she has the weirdest podiums ever: 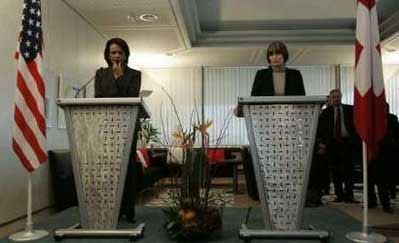 It's another whirlwind tour of Europe for Condi! She was in Germany yesterday, and today she's set to head up some economic forum at a ski resort. Cross your fingers for some Condi Snowbunny photos!

I just wish photographers would stop doing this: 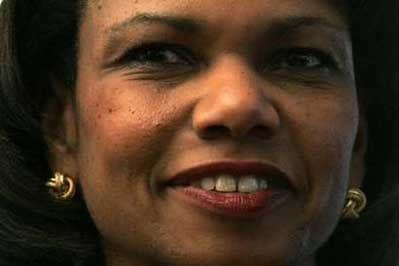 Posted by Peteykins at Wednesday, January 23, 2008

Micheline has great hips. Would be hard for a quarter to bounce off her derriere. Sorry for the sexist remark, do incarcerate me in a Swiss bank vault for my masculine transgression. I miss my Swiss, my Swiss miss misses me.

Condi's teeth look a little scummy in this extreme close-up.
And any dermatologist could skive off those unsightly moles.
But the earrings are holding up well.

Deary me! Those left fists are pretty tightly clenched in the handshaking pic.

Ms. Calmy-Rey clearly struggled to maintain her neutrality (and won, being as how she's an actual diplomat).

"Having a good sense of fashion and dressing well does not make Sec. Condi Rice to be a clothes-horse. She has perfect pitch for wearing what is appropriate, and her international image is of a diplomat, not some fashion model strutting off the runway from New York.

Rather than dressing as a drab matron, Condi Rice has set the tone in the State Department for dignified dressing. I would expect each of the people who work at the State Department to dress for their position in a style which is becoming and well-fitted ...
Posted by: Diane | January 22, 200808:47 PM"

You'd have thought that while at Stanford someone could have casaully introduced her to an Orthodontist, and perhaps a Dermatologist as well...

Tnose podiums are right outta Hitchhiker's Guide or maybe even Fifth Element! was Pinewood Studios having a yard sale?

Last photo: I'm so beautiful...beautiful me.

Mmmm, grate me up some sharp cheddar.

No, they are made-in-Switzerland spaceships, lent by Micheline (can I borrow a tyre, please) for Condi to get back to her home in outer space. Micheline intends to join her as well. What a lovely couple they will be ...

Matty and Kelster: My first thought looking at that first picture was that Micheline reminded my strongly of Twiki from the Buck Rogers television series.