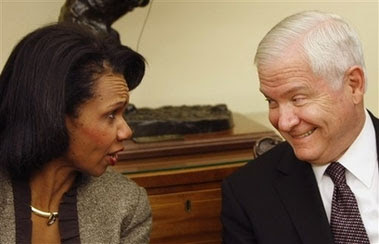 Aw, it's always so cute to see Condi hanging with her ex-boss, the adorable, wee munchkin defense secretary. Ooh, Mr. Gates! Watch out! While Condi's falling asleep, your head is about to be trampled by a horrible Remington: 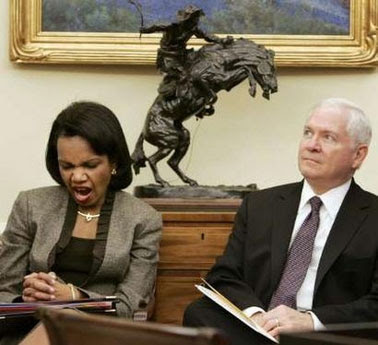 (Reuters)
Any fresh Condiographical info today? No, but Glenn Kessler wrote about her anyway, and it's more analysis of the Peacestravaganza, natch! Best part: Condi claims "she did not want to draw historical parallels or be too self-reflective," but then, well, you know what's coming next: ...as a young girl in segregated Alabama blah blah blah burning churches blah blah blah....

And that's the great thing about the Mid-East Peace Process™! It's really all about Condi! I, for one, wouldn't have it any other way.
Posted by Peteykins at Thursday, November 29, 2007

condi has been working too hard -- with the middle east, iran, chavez, the australian electionthe taliban, the poles pulling out (not out of condi, not many poles have visited there!)....too many crises, too few condihours to solve the world's problems

she needs a good pick me up

and bobby gates aint it ---- maybe she needs to hang with Kick Ass....

I love Secretary Gates! He's so adorably attentive in that second photo.

Somebody looks like they could use a nap. Not one more word, young lady, you march right upstairs before I burn your church down.

the caption on that first photo could probably read:
Gatesy: Say, how about we step into a darkroom and see what develops? Heh heh heh
Condi: Are you out of your fucking mind?

2nd photo:
Condi: whew, that was a workout. He's just so little!
Gatesy: Am I out of my fucking mind?