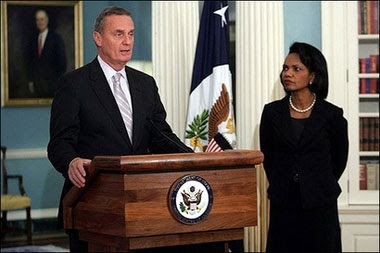 US Secretary of State Condoleezza Rice(R) listens as former NATO commander General Jim Jones speaks after being introduced as special envoy for Middle East security, focusing on Palestinian and Israeli security issues at the State Department in Washington, DC. Jones will assist the Palestinians to "better design a security concept" for the future country they want to create, Rice told reporters.(AFP/Tim Sloan)

A what? A security concept? Once again, Madame Secretary's ability to wax meaningless leaves me bewildered and impressed. Good luck, General Jim!

But forget Jim Jones, because ooooooh, I just can't believe all the mean things Maureen Dowd said about Condi today! OMG! And it's totally unfair, because she gets all her dirt from coworker Elizabeth Bumiller's book which isn't even published yet. But anyway, if there are more gems like the following, maybe Bumiller's book will be worth reading after all:

...in another instance of spectacular willful ignorance, she was blindsided by the Hamas win in the Palestinian elections.

As she described it to Bumiller, she went upstairs at 5 a.m. the morning after the Palestinian elections in 2006 to the gym in her Watergate apartment to exercise on her elliptical machine. She saw the news crawl reporting the Hamas victory.

“I thought, ‘Well, that’s not right,’ ” she said. She kept exercising for awhile but finally got off the elliptical trainer and called the State Department. “I said, ‘What happened in the Palestinian elections?’ and they said, ‘Oh, Hamas won.’ And I thought, ‘Oh, my goodness*! Hamas won?’ ”

When she couldn’t reach the State Department official on the ground in the Palestinian territories, she did what any loyal Bushie would do: She got back on the elliptical.

“I thought, might as well finish exercising,” Rice told Bumiller. “It’s going to be a really long day.” It was one of the few times she was prescient on the Middle East.


“Eastern Europe ... will remain the center of Moscow’s alliance structure for many years to come.”

Will we see that? I think not.

And BTW, with all that money and a tony DC address, can Maureen Dowd not find a better colorist? Whatever the hell that is, she is sporting, it is all wrong. That is a color that does not occur in nature.

Oh, I forgot. It's Maureen Dowd. No one gives a flying crap.

I believe that our government could once again work the way we expect it to if we could just make the offices of the West Wing look something like the interior of Curves.

Absolutely stay on the elliptical.

As Billy Crystal's character Fernando might say if we had been stupid enough to elect him to high office, "My friends, it is better to look good than to govern good. And Condi... she looks mah-velous!

now condi is staring into Jim Jones eyes -- ready to move to Guyana, drink kool aid, be his sex partner and run away when rev jim wants her to drink poison.....

OMG indeed. Reminds me of Nero continuing to fiddle while Rome burned.
Oh and I don't like Maureen Dowd's hair color either, but women our age seem to love that fucked up color. I think it happens when a dark brunette tries to go goldenrod and all that hidden red pops up instead.

Perhaps we are seeing more and more of the 'bot, because the real Condi is exercising a lot - anticipating many longer days.

Note that the 'Bot's hair is still looking over-long and schlumpy, evidence that it's been having to work overtime while Condi's on the elliptical in her shi-shi apt. And again with the giant pearls--give it a rest!

I wonder how long it took the Condi-men at State to come up with "security concept."

That August she had been advised
Bin Laden, he was plottin',
To finish up the job: surmised
She "this cannot be nothin'--

Nothin' of my concern, although
He did attempt before
To take the towers down," and so
The threat she did ignore.

It was, recall, her foremost plan
To let things amble on
Without much interference--can
You wonder they fell down?

Quoth she, "None ever had before
Imagined that he might
Hijack a plane," but holy war
Had told its methods quite.

Dismissive of the evidence,
So all that motley crew
By auto-pilot mindset, hence
Chose what it "felt" was true.

Hands off, do-nothing policy
Devolves the way it has,
But then, "what will it think of me,
Posterity," she says--

And tries to of a sudden make
A last ditch effort to
Start Mideast peace talks: people shake
Their heads and wonder, who?

During, say, seven years was squandered
The semblance of disinterest,
Impartiality--she pandered
And made a striking contrast

To all her predecessors, as
At least portended to be
Above the fray--involved, she was
Pure partisan and grubby.

So they will pass away, all as
A dim-remembered dream,
When honesty ran out of gas
And trust ran out of steam.

Yow... why should Condi miss her workout just because Israel and Palestine have failed to live side by side in peace and security? Is the Middle East better off if she has thunder thighs? Of course not.

Just thinking about the elliptical makes me wonder where she keeps it in her Watergate condo... is it in front of a big screen telly with Fox news turned on?

The least Condi can do is give the American public a glimpse of her abode.

And y'all above, relax about Maureen's hair color. It's a persona thing... every Irish woman of her age has to go with that tint. Then we can all say, Ah, she's a fiery one, that Maureen.

karen zipdrive- you summed up the maureen dowd issue perfectly!

A girl doesn't get an ass you can bounce a quarter off by stepping off the eliptical every time some little election happens. Sheesh!

Just when I thought the Mideast Peace Summit/ Conf/Meeting/Gathering was going to be the redeeming moment for Dr. Condipeacezza, this story from the Times (Sun, Dec. 2, 2007), "Gay rumours eclipse Condi’s glory moment"