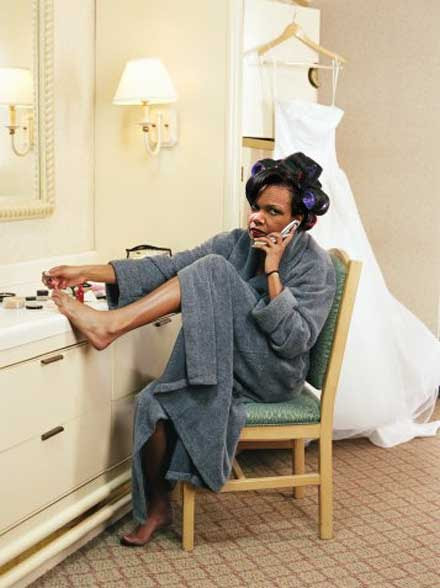 Prepare to be terribly impressed! Oh, sure, it's easy for me to sit on my glitter-infused, translucent fuchsia Lucite™ throne, eating bon bons and moaning, tsk, that Condi never really does anything, does she?


But she does! Today, for instance, AFP reports that Condi -- Condi herself -- deigned to pick up the phone* and call that Mahmud fella:

The telephone contact came amid uncertainty over whether Rice was about to return to the Middle East to drum up support for the widely-publicised peace conference, expected to take place later this month in the United States.

*Wire service photographers, alas, were not present for this dramatic use of an electronic device by the hard-toiling Princess Diplomat, so I've dramatized the event for you!
Posted by Peteykins at Thursday, November 15, 2007

She does her own toes? Who knew?

This is actually the sexiest picture, real or photoshopped, I have ever seen of Condi, and I don't have a foot/nail fetish.

I'm with anonymous! Normally this blog is the only place I can handle seeing Condi, but I want to print this one out and put it on my 'fridge with the special Sailor Moon magnets.

Tell me this is photoshopped....that bathrobe is butt ugly and how is it that she manages that punim at all times?....and is that a debutante gown in the background? So many questions, so few answers

I'm frantically searching for the "Unbelievably Not Photoshopped" label, but my search is in vain! Tell us, Princess--is this really a Randi Bean photo taken at Chez Lecondel?

OK, do you all need to review the concept behind the "unbelievably not photoshopped" tag?

It's remarkably lifelike, your Glitteriness. Your skill is unparallelled.

That image needs to be one of those garish, thick, plastic like iron-on tshirt transfers; like those from circa 1977. I'd give a quart of plasma for one....