We Won't Have Karen Hughes to Kick Around Anymore 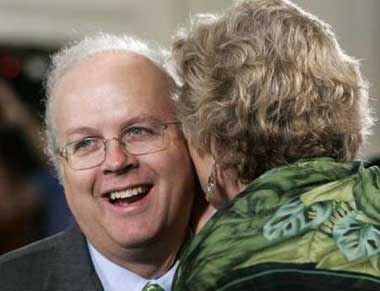 Karen "Kick Ass" Hughes resigned! And she's done... um... what, lately? I mentioned recently, of course, that Laura Bush has pretty much taken over her job, so maybe Karen got a little miffed? Or maybe the Blackwater scandal made the job she was barely doing just that much harder not to do? This is sad, though, because she's one of Bush's last few incompetent Texas buddies to stick around. Can Tori Margaret Spelling be far behind? According to the Associated Press:

Hughes said she plans to quit her job as undersecretary of state and return to Texas, although improving the world's view of the United States is a "long-term challenge" that will outlast her.

"This will take a number of years," Hughes said in an interview to announce her departure. She was informing her staff of her decision Wednesday morning.

And Karen's right! It will for sure take "a number of years" for the world to recover from her efforts on behalf of her much-beloved boss.

Oh no. Does that mean she is coming back to Texas? Because we don't want her.

So the Bush Administration is losing its soft n' cuddly liar, its Undersecretary of Make Nice.

I guess they'll have to shift the Dickster over to fill in.

If you look closely, you can see the tip of Karen's tongue poking out of Karl's right ear...

Mmmm. nothing like some good alien lovin' on Halloween!

Okay, didn't they have some crap rule about if you were still on the job on Labor Day 2007, you had to stay till the bitter end? Didn't some people quit just before Labor Day using that bullshit excuse?

I guess I shouldn't complain. Having her stay in Texas is much better than having her fly around the world, with people waving and muttering under their breaths "Fucking Americans!" every time she leaves.

Karen Hughes, bazomgrl? Hell to the NO!!!

Josee or Ursula or Dora... that I could maybe see. Even Katherine Harris. But never Karen Hughes.

so will anybody even notice she's gone?

No one will notice, except maybe for CrazyEyes. She's probably sitting in Hughes' chair right now, planning a new "America loves you!" trip to piss off some more middle easterners. Great.

God she is one ugly beeyotch.

Crazy Eyes is drunk on hootch and happiness after this one.

I'll bet she's the type who'll sit around the bars near the Texas Capitol shooting the shit with her closeted gay GOP pals like Gov. Rick Perry.
If I ever ran into her, I'd either tell her off or buy her a drink and ask what Condi was *really* like.

She went back to work because she wanted to spend less time with her family!

Was anyone ever less qualified for this particular job?