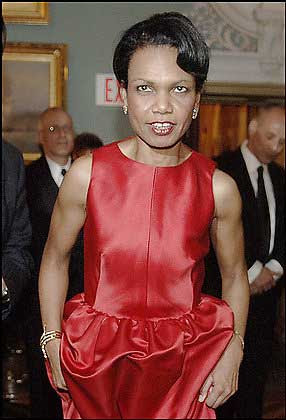 The other day, I wrote about the to-do in Great Britain about the big birthday party they threw for Condi, a fabulous affair in which they even provided the glittering diplomatrix with a sensational couture gown to wear. Well, like all of you (I'm assuming), I really wanted to see that dress after reading about it! And now (above) we can, thanks to the Washington Post.

I've been waiting, like, totally forever to use that headline!

UPDATE! Did Condi end up having to pay for the gown herself? LMAO! From today's (Friday's) Al Kamen column:

There's no such thing as a free lunch. Or a free dress, it seems. Turns out British Ambassador David Manning, who arranged that surprise -- and lavish -- 50th-birthday party here for Secretary of State Condoleezza Rice back in '04, bought her that beautiful scarlet gown designed by Oscar de la Renta.

Word has gotten out in London recently that British taxpayers paid $9,512.05 for the do, attended by more than 100 of Rice's friends -- including President Bush. The Guardian newspaper reports that a "Foreign Office spokesman said that figure did not include the dress, which was a personal gift from the then British ambassador, Sir David Manning."

But a State Department spokesman said yesterday that Rice paid for the dress, which we hear may have cost more than the event itself.

That could be a contradiction, but it's more likely that Manning bought the dress for Rice as a surprise gift and that federal rules would not allow her to keep it unless she paid for it.

This dress is an excellent illustration of the fact that not all couture is haute...

...though the fabulous upper arms of La Reine Diplomatrice totally make up for the unflattering bodice design

Princess, maybe you should add the "unbelievably not photoshopped" label to this post. It looks like her head has been attached to someone else's body, like that very disturbing thing you did with Ted Stevens a while back.

Also, Condi without pearls. Tsk, tsk. Our beloved Ursula can pull off looks without scarves, but without pearls, it just isn't Condi.

Maybe that's why I think it's photoshopped!

Apparently Condi mislaid her breasts.
She looks like a fudgesicle stick in that ugly ass dress.

and is it just me, or does she look like she's blind, with her eyes kinda wandering and unfocused?

Man, that's a hideous dress--perhaps Oscar was making his own little commentary on La Condi.

My God, she looks hideous! Maybe we should call her Franken-Rice.

How, in the course of making the poor woman up (she had, if memory serves, a special mini-glamour session before making her Big Entrance at this fete), did the artist manage to layer what looks like ten layers of gloss on her lips while totally ignoring her steely, almost reptilian eyes? Never has a little smoky shadow been so needed.

Also - can only echo the crowd - Oscar either deliberately sabotaged the Secretary, or that is his most off day since the mid 1960s. It looks like the kind of Simplicity pattern that was once a staple of Midwestern proms.

The dressmaker must have assumed that a wrap would augment the dress. TSK!

WTF? I think Mattyboy is onto something.

Did you tinker with this Missy or what?

does this red-coated reptilian creature bite?

who stole Grace Jones' dress and how did Condi get it?

This is something I would expect to see at Go Fug Yourself.

when you leave your taste up your husband/boss's skanky ass --- you get some of the worst clothing this side of 1959 soviet style....

Good god, are you sure someone hasn't photoshopped her head bigger?

good god, is she hideous, or what?

Holy crap that has to be photoshopped she looks like a mutant!

It's possible that in a theorical other universe (possibly one populated by clowns), that dress might have actually worked.

We are clearly not in that universe.

Wait, isn't that the same dress as pictured here?
http://sparklepony.blogspot.com/2005/12/red-taffeta-monster-nearly-devours.html