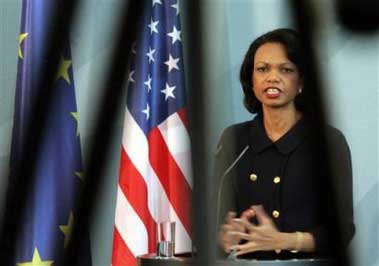 If this blog has proven anything, it's that there will never, ever be a shortage of photographic coverage of Condoleezza Rice. I believe she's snapped more often than her boss, but that would be totally boring to research, so let's just decide it's true. Could Condi, seen above at a 2005 event so choked with photographers that they were shooting through each other's tripods, be the most photographed politico in American History? Mmmm... probably not; that honor goes to JFK, I'm sure. But I bet Dr. Ferragamo is in the top five!

So anyway, I'm sure you can just imagine how much I laughed this morning upon reading this in Al Kamen's column:

In contrast to the vice president, Secretary of State Condoleezza Rice has been much more accessible to the media both here and abroad. And the buzz is she's even going to take a photographer from State's public affairs shop along next week on her trip to Moscow and the Middle East.

"She wants to start documenting stuff," we were told by a source. Hauling around your own photographer may be unprecedented -- though she used to have an aide who was handy with a camera to record trips.

She wants to start documenting stuff? It's hard to imagine what has gone undocumented, but presumably we can now look forward to the previously guarded secrets of Condi's tooth brushing and feminine protection techniques. Thank goodness! I can't wait!
Posted by Peteykins at Friday, October 05, 2007

not only vulgar, but full of herself...a deadly combination, just the kind of mix that leads to Iraq.

To the right on all the issues cause her dreams are presidental. Condilicious.

Whoa... she's really anxious. She's about to crush the skull of her invisible friend.

If only she'd had that camera guy handy to snap her "mushroom cloud"/smoking gun.

I think she's trying to distance herself from the 5 million missing emails. "See? I documented lots of stuff!"

It's really quite simple, I think. Condi wants editorial control over photos taken of her, and who better than a paid PR flak to shoot her, then let Condi choose the most flattering shots?
What, you don't think she's vain enough for that? Puleeze.

Karenzipdrive is right -- those horrible helmet-hair shots really got to her.