When Condi Can't Play Golf, Do the Terrorists Win? 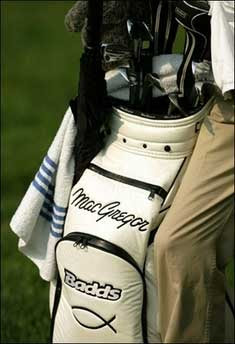 A detail of a golf bag is seen in June. Australian Foreign Minister Alexander Downer had challenged US Secretary of State Condoleezza Rice to a game at Sydney's Rose Bay Golf Club on Saturday but, with Australia's largest city under the biggest security clampdown in the country's history, golf had to give way, Downer admitted afterwards. (AFP/GettyImages/File/Donald Miralle)

This is an outrage! Who knew that in Australia, as in Iraq, Bush 'n' Condi must be kept safe within a tight perimeter of barbed wire, lethal PR flaks, and symmetrically-placed Humvees. It's basically a fun-kill zone, and that includes golf!

But what I really love is what the article doesn't quite get to, that the situation presents us with a fantastic conundrum: the golf-thwarting security measures are in place because George and Condi are there, and that means that Condi can only play golf in Australia if Condi isn't there! It's a paradox! Yay!

And strange about the Jesus-bedecked golf bag AFP sublicensed from Getty Images to illustrate this tragic tale of the cloud of antifun which seems to be surrounding Condi these days. What does it all mean?
Posted by Peteykins at Thursday, September 06, 2007

Everybody knows that if you can't get in a quick 9 holes, the terrorists will win.

Perhaps our Condi could invite Mr. Downer (ooh, now that's a good name for someone who entices you with an offer of golf then palms you off to the Defense Secretary and his Mess Hall Mystery Meat!) for a few rounds over at Congressional. Then he'd HAVE to play golf with her, 'cause you know how those diplomatic types live for reciprocity.

As exquisite as Condi's Fabulous Golf Paradox might be ("she can only play golf when she's not actually there"), this trademarked Pony Pal needs to make a request of the DC Princess. I've just read that Adam Kokesh has been arrested in front of the White House by the frigging mounted police with lotsa reporters in attendance. Please, after a week of Larry Craig and that scary food in the chafing dish, we deserve a picture of Adam. In fast, we deserve multiple pictures of Adam. Please, princess.

SF Mike: I'm actually really pissed at that group and the way they're putting up their signs, so I'm reluctant to give them any publicity. The extent to which they're overdoing their signs is insane. At the corner by my apartment, they pasted them up on a power box and all four sides of the bases of all four streetlights; that's 17 big, ugly, bright yellow signs on just one corner! Assholes!

There's a pic of Adam getting cuffed on the Post's site. I really don't want to give him more publicity unless he takes the shirt off.

Oh, there are pics of Adam at Yahoo, too. Seriously, though, I'm so over that guy.

Ah, you can be such a harsh taskmistress, but really, how dare they uglify your neighborhood? Your Pony Pals (trademarked, of course) understand.

What WERE those people thinking, sullying your stable-area with so many signs? Assholes indeed.

I'm also wondering what's up with the Jesus fish on the golf bag--is that supposed to be Bush's bag (heh) and leg? I'm stumped.

I think the name Jesus Christ is often invoked on golf courses. Ex:

"Jesus Christ, I can't believe I missed that goddamn putt!"

There's a Jesus fish on the bag, but talit hanging from the side... I'm so confused.