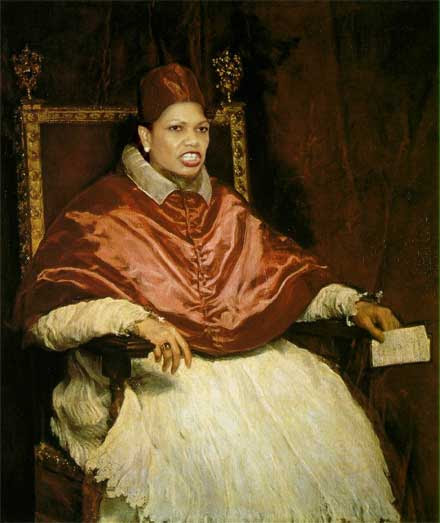 Posted by Peteykins at Thursday, September 20, 2007

You know you're an asshole when the pope lies about being on vacation so he doesn't have to see you.
I'm not a big fan of Pope Ratzo but his stock went way up after I heard about the papal snub.

The satin! the lace! The ring! It all says "I'm in command AND I feel pretty."

Plus, the fetching cap solves all of Condi's pesky hair issues.

Pope Rice. Pope-Rice? Has a nice ring. Almost like Head-On.

Heh heh, she also has a nice Bork Beard going on too.

Princess, your PS skills never cease to amaze me.

LOVE it, Sparkles! Too bad about the meeting though--they could have discussed the relative merits of Ferragamo vs. Prada.

So true, divageek, so true!

Princess, you're a national treasure. Brilliant PhotoShopping as usual.

In this amazing photomontage, there is only one little thing that does not seem quite right: the left hand holding the paper...it seems somewhat out of proportion, almost appearing like the hand of someone of the male persuasion.

Also, I do fear this portrait will only give more ammunition to those in the Church who feel that women should not be allowed in the priesthood.

So Condi is to the Pope as Cindy Sheehan is to George W. Bush. Amazing!

Don't call us, we'll call you.

OMG! A dis by the Pope! Conversations of Italian design houses that will never be! The world seems a littler crueller place. Shame on you, Ratzi.

Because: I'm sure if the situation were reversed, and some significant body of leadership like, say, Congress, asked her to show up for a little chat . . .

Her Condiness is not saying "shit", is she?

That is too funny. I am roaring.