Pretend Nothing is Wrong 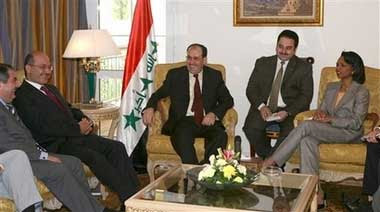 A big diplomatic confab? Heck, it's just another series of photo-ops for Condi! I love the bit in the caption about how her trip is "overshadowed by the possibility of a thaw" between the US and Syria and Iran. They make it sound like that's a bad thing! Oh wait, right, for the Bush administration, that is a bad thing. The threat of impending peace! Run away, run away, Condi!

And I must apologize for being a little lax in keeping up with the Dr. Ferragamo photo-ops lately. Would you believe that I've skipped over several matching armchairs and dueling podiums sessions? After a while, they just blur together.
Posted by Peteykins at Wednesday, May 02, 2007

It's understandable that you would be dazzled and distracted by sprinkly donuts after years of covering the Condibeat.

Remember: the breaks we take enable us to return refreshed to our familiar ground with twinkly new eyes.

Notice that the photo was taken by Mike Nelson, pool.

Only the Elderly PonyPals™ such as myself will understand that soon enough, his lungs were burning, desparate for air.

Younger PonyPals™ might wonder if it's the same guy who used to host Mystery Science Theater 3000.

question: how does condi manage in a cultural setting and country where women have no credibility - at least no credibility of the sort that she's attempting to convey? where the expected role of a women is vastly different from what she represents?
...

What exactly does she represent? Incompetence?

yeah, of course incompetence. she represents bushco after all.

I'm just wondering when these prime ministers talk to and meet with her, what are they thinking? do they wonder why bush sent a woman?

just musing over the cultural divides.
...