Sparklemom Has Advice for Condi 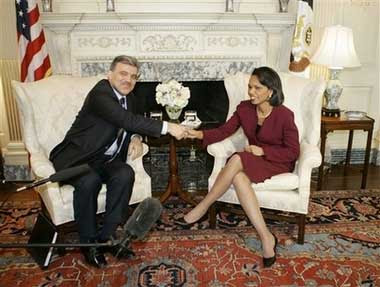 Mom: Have you noticed how Condi crosses her legs?
Me: [laughs] Oh yes, I've noticed. Kinda spastic-akimbo.
Mom: And she's going to the Middle East and places like Indonesia, and she's throwing her legs all over the place! You know who she should look at?
Me: Who?
Mom: Nancy Pelosi. Nancy Pelosi knows how to sit. Condi should get lessons from her.
Me: Mom, I don't think that's going to happen.

But is my mother right? Of course she's right: 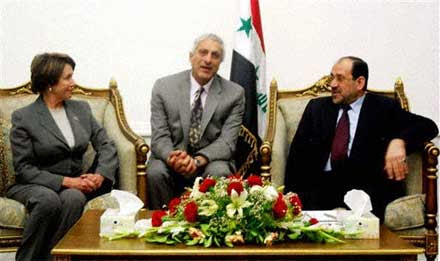 Iraqi Prime Minister Nouri al-Maliki and House Speaker Nancy Pelosi meet in Baghdad, Friday Jan 26, 2007, in this image released by the Iraqi Government. Pelosi has been a sharp critic of the Bush administration's conduct of the war and has led a drive in Congress against sending 21,500 more troops to the effort as part of a new security crackdown in Baghdad. Man in the center is an unidentified translator. (AP Photo/Iraqi Government)

Well Jeez, ma! Condi is only the Secretary of State. They aren't supposed to know about traditions in other countries or protocol like: "When sitting cross-legged on sofas or cushions, soles of the feet must not be shown, preferably both feet are kept on the floor." www.oag.com.

Secretaries of State do not google the internets like House Gramma's do to find these things out. And if they are republican they do NOT listen to career bureaucrats who would know better either.

By now that cream colored chair has a big douche stain where she sits.

Let's face it....Condi is not going to feel like one of the "it" gurlz until she too is upskirted. Can you really blame her?

To hell with you killjoys. I drop by here every other day to see Condi do that crossover leg action. Screams "butch", dontchaknow. A retiring kind of girl would be satisified with the crossing of the ankles.

Not our Condi! She takes control of her lebensraum.

Li'l Nancy is dressed demurely enough in a pantsuit. Knees together, hands NOT in lap but forearm keeping the ladyparts from being an issue. Good on ya, Nancy!

The unidentified translator seems to be in a reverie. "Ah, when I was a boy, how lovely it was. We had a date tree in our front yard, and I used to climb like a little monkey up the tree and eat the dates before I got back down. Get down from that tree, you little monkey! You'll break your neck some day!, my mother would yell from the kitchen window, but I would just laugh. I never fell from the date tree..."

Nancy (sotto voce): Does he ever stop talking about the fucking date tree?

Nouri: He's just about done, give him another minute. He's really good at translating, trust me. He's bleeped out every obscenity I ever said to Dick Cheney. Never misses a beat.

This is why it sucks to be a girl!

Just look at the MEN in those photos! None of them seemed too concerned with how they are sitting.

Sit however ya want Condi!

I'm gona go with Condi on this one. With the picture of Nancy you can almost see the thought bubble "knees together, back straight." It seems a diplonovice move.

Keep your legs together. Granny Short. 1962.

Nancy Pelosi got to go to cotillion as a child and learn the social graces. Condi's mummy was afraid that one of the cotillion boys would take her baby out on the golf course (cotillions are usually held at country clubs) and pop her little cherry somewhere between the waltz and the tango.