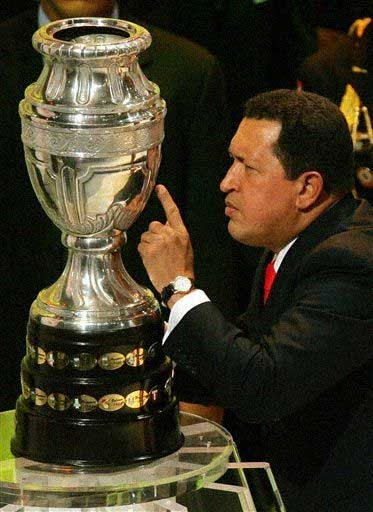 "It had been days since she had given me any attention. How are you, Condoleezza?" Chavez asked in a speech on Wednesday to pensioners in the capital of Caracas.

It was Chavez's first response to Rice's testimony last week to a US congressional committee that the Venezuelan leader was "destroying his own country" economically and politically - an apparent reference to a centralisation of power in Venezuela and moves to nationalise key sectors of the economy.

"My dear friend Condoleezza says I am destroying the Venezuelan economy," said Chavez, a fierce critic of US-style capitalism, in his first public appearance in 10 days.

"Death to the empire!" Chavez said. "We will not be dominated. We have decided to be free!"

Chavez also said Venezuela was not concerned with plans by the Bush administration to become less dependent on crude from politically unfriendly nations.

"If they do not want to buy it, say it, and I will not sell them oil," he said. Venezuela's top export market for crude is the United States.

Chavez last appeared in public at a February 4 military parade, during which a man interrupted his speech with shouts before being dragged away by guards.

That picture up top, by the way, shows nutty Hugo at the same event at which the above taunts were... um... taunted. I really like to think that he's wagging his finger at that trophy and chastising it like it's Condi. Wheee!

UPDATE: Pony Pal™ King Friday reminds us in the comments that you can't spell HUGO without a HUG. So true.
Posted by Peteykins at Thursday, February 15, 2007

My sister used to have a parakeet that would interact with its reflection as if it were another bird.

This same sort of thing probably happens pretty often with heads of state. I'll bet the White House has removed all reflective surfaces from Crazy Eyes' sight. I could see her primping herself and then lashing out in a squacking fury at the mirror in front of her vanity.

Once Chavez actually touched the metal, he probably found it to be far too soft and warm to actually be Condi. The look on his face might be confusion at this fact.

Citgo gas stations sell Venezuelan gas exclusively. That's why I gas up there. It's my way of stickin' it to the man. :)

I think he's putting a booger on it.

I thought perhaps the urn contained her ashes.

I think Hugo wants to be alone with Condi, that much is painfully obvious. However, Hugo needs to learn how to do two things:

By the way, I should tell you that Hugo Chavez's government owns a majority interest in the Diebold Company. True Fact. People at the State Department don't like to talk about this.

Does that mean that Hugo is happy with having an icky administration in place here in the USA, or does he think that's the only kind we have?

The only thing Chavez will accomlish is making his third world country more third world. Wow! What an enlightened leader!