Are You Ready for Condi Couture? 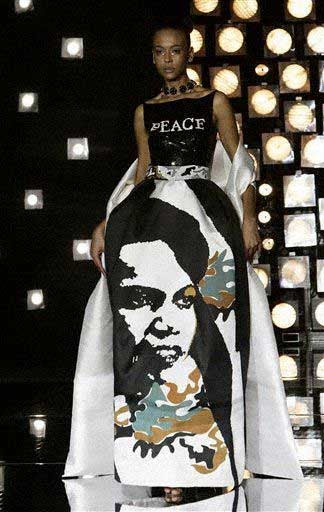 A model wears a creation with a portrait of U.S. Secretary of State Condoleezza Rice on her skirt, by Italian fashion designer Gattinoni for his Spring-Summer 2007 collection at Rome's Auditorium, Sunday, Jan. 28, 2007. Gattinoni presented creations with portraits of some of the world's most influential women, such as Condoleezza Rice, U.S. Sen. Hillary Rodham Clinton, French Socialist presidential candidate Segolene Royal. (AP Photo/Riccardo De Luca)

And who wouldn't want to arrive at the ball wearing a gown featuring Condi vomiting camouflage paired, in a brilliant non-sequitur, with the word peace? It's simply the thing in which to be seen at your next war crimes trial.

EDIT: I really should show the other gowns, too. Behold the Hillary dress (Hey! Fair 'n' Balanced!): 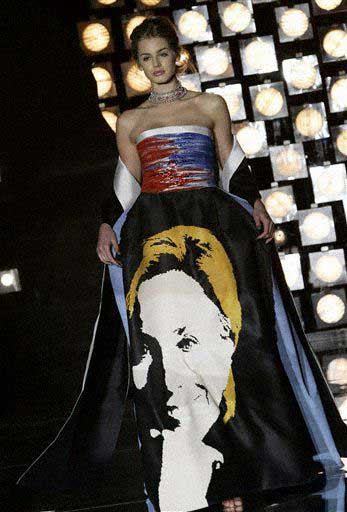 And the whole lineup:

UPDATE: I'm sooo jealous I didn't come up with the phrase creeping fashionism.
Posted by Peteykins at Monday, January 29, 2007

that gives me an idea... sell Dick Cheney cockrings.

Hrh: would you attach the rings with a dick chain-y?

As you pointed out, the Condi one appears to be ill... none of the others do. Note that the Condi dress stands separate from the others, as though even as a representation in fabric, she can't seem to get on the same team as the other world leader types.

So....Gattinoni's doing satire right? With the 'Peace' on the Condi dress? And Condi's face in white? Like, tell me it's all a joke?

But I have a small dog who would do wonders to those dresses.... little yapper attacks!

Ok, I recognize Condi, Hillary, and Queen Elizabeth (best image by a long shot). Who is the one between Hillary and Queen? Why is there a teeny man smooching her cheek?

Through the grace of Google, I answered my own question. The fourth one is French Socialist presidential candidate Segolene Royal. I still don't know why that teeny person is kissing her, though.

I want a Condi peace dress! I want it now!
Damn, you don't think they're made in plus-girl sizes, do you? Certainly, with the larger-than-life ladies depicted, it's a possibility?

Friends, if I can hope, faintly, for some sympathy re this message:

Thank God the Roman Catholic Church still provides rosaries in this time of total decline. Do recite you Hail Marys, you all, even if you do not believe that "Roma locuta est, causa finita est." Blast the Reformation.

Would anyone from the Austro-Hungarian Empire dress in the way shown in the above PP photos? An abomination, an insult to civilization.

Ursula, no wonder we PP admirers love you here in the US of A -- as a reaction to the utter vulgarity of our Bush times.

Why, let us not so boldly ask, did WWI (not to speak of Dubya's "war on terror") ever take place to begin with?

It -- WWI -- led, along its many "the- center-cannot hold" results, to this -- the dreadful Wilson/Bush/Rice
misadmistration,with Ms Rice on a T-shirt somewhere in the provinces Europa, so far from Vienna...

The Hillary dress makes the model look hippy--not at all flattering. But it's a pretty accurate representation of Hillary--tries to fit everyone, works on no one.

As for your assessment of the Condi dress: "vomiting camouflage"--pure genius. Kudos.

terry - the teeny person kissing Segolene is obviously Jacques Chirac. His representation is sized in proportion to his influence, which is measured by the saliva he smears on the world's diplomatrixes.

Oh dear. Condie is expeiencing a birth pang of freedom.

My guess is the little man kissing Ms. Royal is her life partner, Francois Hollande, the First Secretary of the French Socialist Party and the father of her four children. He's a powerful politician in his own right.

Oh sweet jebus. The things you find, your highness. (and congrats on the C&L link. I had nothing to do with it, THIS time. xo)

Will nobody who knows how to photoshop correct Gattinoni´s unpardonable omission and give us the PSP version?

Actually, I really like that top on the Hillary dress.

I think the Condi dress should be called "Peace of Ass"

Caption for the "Condi outfit:"

PEACE won't happen because of what I'm wearing...