Peculiar Condi Protest of the Day 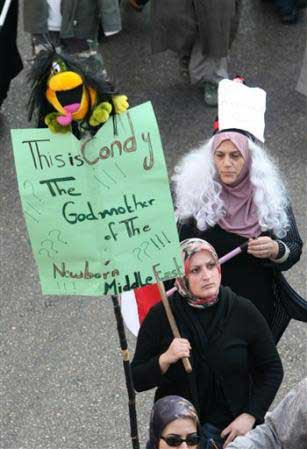 Lebanese woman supporter of Hezbollah and its pro-Syrian allies carries a banner against Secretary of State Condoleezza Rice during a demonstration to force the resignation of Western-backed Prime Minister Fuad Saniora, in Beirut, Lebanon Friday Dec. 1. (AP Photo)

Sometimes I'm just not sure how to respond to protesters in other countries, but these two get megapoints for style and plush-toy usage. The more I look, though, the more my head hurts. The question marks and exclamation points, the white wig, the strange hat... I'm just not able to decipher their metaphors. Huge bonus points for arranging the stuffed bird's (frog's? What is that thing?) hair in an accurate approximation of the Condi coiffure.
Posted by Peteykins at Friday, December 01, 2006

Yeah, okay... but let's not get too worked up about the punctuation marks.

One Lynne Truss is plenty.

I don't think that's a bird. Looks more like a frog to me.

She had that comment about the "birth pangs of a new Middle East." I would guess that's what they're referencing.

Well, Condi sure as hell could be an EVIL godmother. Midwife to a monstrous abortion...

It's well-known at Stanford that Condi is gay.

OK, OK... Condi the Lezbian, you may post all you want here at Princess Sparkle Pony.

It is suggested that other Pony Pals refrain from responding to our enthusiastic new friend, or your posts will be deleted.

So, Mr. Condi the Lezbian: why, exactly are you posting here? I'm puzzled. First of all, you seem to think that calling Condi a "lezbian" is an insult, and yet at least half of the readers of this blog are lesbians. If anything, if Condi were a lesbian, we would like her more, not less.

Second, perhaps you have low reading-comprehension skills, and believe that this is a pro-Condi blog, and that we will be upset that you're "insulting" Condi. However, if you read between the lines a little more carefully, you may be surprised to discover that not only does this blog contain subtle criticisms of Dr. Ferragamo (like calling her Dr. Ferragamo, for instance), but that Princess Sparkle Pony is, in fact, the single most thorough Condi-bashing site on the internet.

So go ahead... bash Condi. We love bashing Condi her on the Pink Pony. Just turn off the caps-lock and come up with a new script, OK.

And again: other Pony Pals, keep out of it.

Condosleeza is gay. She's nasty looking and has the 'evil eye' thing going all the time. You just know she is one total bitch.

Oh, and by the way, if you think I'm a "lezbian", you may find further surprises awaiting you in my profile.

So go for it: you have earned my full, undivided attention for the next half-hour or so.

Rice a lesbian...???? is the ocean blue, do birds fly? The more important question is why the Secretary of the State can't get her darn teeth fixed?????

Wait, I do want to ask you a question: you've been posting your "Condi is a lesbian" information over and over again her at this blog. First, I just deleted your posts because they were boring and in all-caps. Then, you kept posting them over and over after I deleted them. Then, I changed the settings so that only registered users could comment, and so you went to the trouble of registering an account at Blogger just so you could keep posting the same thing over and over again.

Why? Why is your message so important? Also, seriously, did you think this was a pro-Condi blog?

I have frequently wondered why Condi hasn't had her teeth fixed. It's just one of life's great mysteries.

OK, so are we square now? Please, feel free to insult Condi all you want here at Princess Sparkle Pony, but try to be more creative. This is a serious Condi-bashing site, so if you want to play with the big kids, you've just got to come up with something better than "CONDOSELEEZA IS A LEZBIAN" or people will just feel sorry for you.

Hate the bitch, ugly lezbian doesn't want to come out but instead hides behind bush and laura

Dear Princess, I too, am bothered by the hair outside the hijab. How does Sharia law handle this? Maybe the women of the entire muslim world could buck strident rules by wearing headscarves over their real hair and a 'Condi' helmet over the scarf? I think I might be a genius.

This leads me to ponder the wigs in the picture altogether. I realize that Lebanon is more western that some other middle eastern countries, but do you suppose life is hard for a wigmaker in a muslim country?

To tell the truth, it looks like a parrot to me. Arrrrr! Avast, ye terrorists!

I was thinking that the weird black hair on the puppet was an attempt to make fun of Dr. Rice's race, but I just can't figure out what the hell is going on in that picture.

The one with the wig (wearing it outside the hijab is about the only thing that makes sense in that pic) is holding some sort of wand - maybe she's a fairy god-mother? But the sign indicates a familial role as a Godmother to the 'new Middle East'.

I think the green sign is actually being held by a woman at the bottom of the picture wearing sunglasses. The lady behind her might be holding the puppet on a stick. And doesn't that lady look PISSED OFF??

Now, now, girls, such hissing and growling and sharpening of claws further up has blinded you all to the obvious. Flowing white wigs are de rigueur with handsome, gay, Lebanese boys.

Re your comment, "I have frequently wondered why Condi hasn't had her teeth fixed. It's just one of life's great mysteries" may I suggest that perhaps she, as a once-aspiring musician, wants to look like Madonna ...