Condi Relies Heavily on the Comfort Provided By Her Invisible, Spherical Friend in Jericho 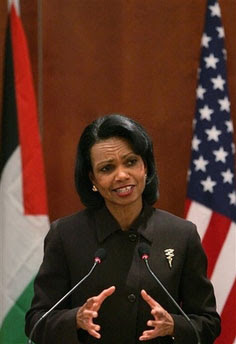 United States Secretary of State Condoleezza Rice speaks during a news conference with Palestinian Authority President Mahmoud Abbas, not seen, following their meeting in the West Bank town of Jericho, Thursday, Nov. 30, 2006. Rice called on Israelis and Palestinians Thursday to step up efforts to achieve peace, saying neither side should take actions that would prejudge a final accord. 'Hopefully we can take this moment to accelerate our efforts and intensify our efforts toward the two-state solution that we all desire,' Rice said at a news conference with Palestinian President Mahmoud Abbas in the West Bank town of Jericho.(AP Photo/Kevin Frayer)

Yes, well, not much else to say about it, but I'll always post new pictures of Condi squeezing her imaginary tribble as they become available. Also, OMG, for probably not the last time, she must once again disappoint the world with her presidential non-aspirations:

PARIS (AFP) -- US Secretary of State Condoleezza Rice has insisted she does not plan to seek the US presidency in 2008, while hailing women's growing role in world politics, in an interview with French television.

"I'm very glad that women are running, and women are winning in many places," Rice told TF1 television late Wednesday. "I was at the inauguration of President Johnson-Sirleaf of Liberia and for President Bachelet in Chile."

"But I won't be one of them," she told the channel from the NATO summit in the Latvian capital Riga, adding that she was "an academic at heart."

"Hopefully I, as secretary of state, can still help the United States to achieve some very important milestones.... But when I've done that, I'll go home to California and teach students about this experience," she said.

Posted by Peteykins at Thursday, November 30, 2006

The poor lady won't have much to teach.

Well, one can't lump all Anonymouses into one category, can one?

I think that Condi needs a dollhouse for Christmas. I must give her parents a heads up.

The poor lady won't have much to teach.

I disagree! Making mistakes is the best way to learn new things!

I haven't checked all of the posts on this subject, but is it possible that the invisible sphere she fondles is the entire planet, at least as she sees it?

Obviously, we know that it is God who has the whole world in His hands, but GWB talks to God, so maybe the Big Guy let Junior have control of the globe for a while, and Condi sweet talked George into letting her be in charge of the globe for short periods of time.

I'm sure the estimable Miss Rice feels, as I do, that this world needs more surrealism. Hence our foreign policy, hence the sphere, hence this beautiful weblog.

Is that a silver 'stink line' on her chest?

But I DO wish she'd stay away from San Francisco. I was just planning to move back there.

Hopefully Stanford will have the good judgment not to let her any where near their campus even though she once pretended to work there and was allowed to visit Palo Alto recently.

Since she has been DICK Cheney's surrogate/news-speak-zoid for some time now she would fit in much better at some bastion of medieval thinking like Bob Jones U or Liberty U.

Is it a federal offense to pie a former Secy of State? Perhaps her invisible friend would shield her.

So there's no good shopping in all these great places?
She's dressed so down.

and besides all of the above, her lapel pin is upside down! no! seriously, people! it is one of those one-squiggly-line *holiday trees*, but it is unmistakenly upside-down

is Condi actually a closet anti-right-wing-anti-christain-anti-jeeezusss-anti-world-peace-nic? OR