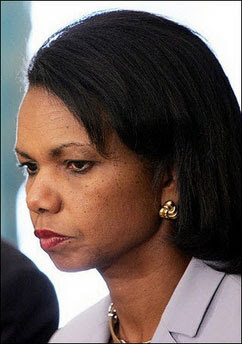 US Secretary of State Condoleezza Rice, seen here on 14 August 2006, spoke with Israel's deputy leader and her French counterpart amid stepped-up efforts to raise an international military force to help implement the UN peace plan for Lebanon, officials said.(AFP/File/Tim Sloan)

We live for these shots, the intimate close-ups of Doctor Ferragamo (or, in this case, her stand-in, the technologically marvellous Condibot). Anyway, that's Condi yesterday, totally basking in the glory of her... well, something, right? After all, she said that a cease-fire between Israel and Lebanon would happen "any day now", and then she waited a few days, and then she said it again! Any day now. Hey, give her a few do-overs and she'll eventually be right.
Posted by Peteykins at Tuesday, August 15, 2006

Somehow I think of the Condibot as being more commanding, or at the very least, perkier.

Sweetest of all Princesses,

Of all the enormous talent, both on the left and the right, in this cry-the-beloved country, the once blessed United States of America, why have we been doomed to have, as Secretary of State, a minor mindless academic with a bleached- tooth-filled, huge "Dune" worm-like mouth rather than a working brain who has no idea what the outside world is about except what she "learned" as a grad student at (of all "cosmopolitan" places) the little isolated learnery called the University of Colorado, where under the tutelage of an insignificant, petty Czech emigre, the father of the vulgar, overweight, pin-wearing Madame Albright, she -- mademoiselle Rice -- became a non-Russian- speaking Soviet "expert" (and later, at Stanford, was chosen as a "dean," which translates into being the "enforcer" for the institutional status quo)? Why the intellectually second-rate, provincial Alabama-raised hair-challenged thing, la Condolence (her true love is American football: OMG), now clothed, like a typical arriviste from the sticks, in attire that no ordinary American can afford, not to speak of her having a physical "trainer" at the State Dept gym we simple citizens could never pay for (her substitute for sex or, better said, simple human contact), should not be teaching high school piano in Denver, Colorado (her true calling), not deciding how this great, now tragic nation of ours should make (wish I could find a less arrogant expression) its mark upon history for the sake of our national interest, and helping mankind in the best of American traditions, which certainly does not include bombing innocent people in the Middle East so that we (forget they) can have "democracy" -- is beyond the comprehension of this ordinary voter.

Wow, anonymous. That sentence above was frankly too long with too many scary question marks, but it was great.

Thank you for this insight above all: "and later, at Stanford, was chosen as a "dean," which translates into being the "enforcer" for the institutional status quo.

Wow anony, you grab the gold ring once again with that one...Condolances to the US indeed.......

Plus kudos for use of "arriviste" which simultaneously manages to provide the most suitable description of Dr. F and to provide the best example of the word's use.