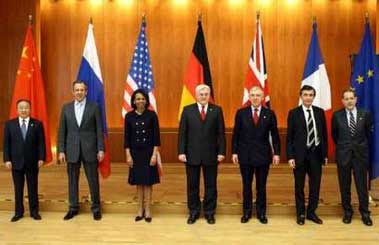 Foreign ministers from the United Nations Security Council permanent members plus Germany meet to discuss Iran's disputed nuclear programme in Berlin March 30, 2006. Six world powers gathered in Berlin on Thursday to discuss the next steps in dealing with Iran's nuclear programme, with Russia and China seeking assurances that there are no plans to use force against Tehran.(L-R) Dai Bingguo from China, Russia's Sergei Lavrov , Condoleezza Rice from the U.S. , Frank-Walter Steinmeier of Germany, Britain's Jack Straw, Philippe Douste-Blazy from France and European Union foreign policy chief Javier Solana. REUTERS/Michael Kappeler/Pool

When I say hit it, I want you to go two up and two back with a big strong turn and back to the Madison.

Are you sure that isn't the Franklin Mint Masters of Diplomacy doll series, with matching flags?

If Condi married the French foreign minister, her name would be Condaleezza Douste-Blazy. What a delicious mouthful!

Holy sweet mother of pearl...that is flippin' hilarious!!!!!
I really like the line dancing thing. Can you photo shop some cowboy hats and boots?

Maybe they were just getting ready to play the 'Dodgeball. Kickin' it World Leader Style.'

Pwapvt- hmm that name has definite possibilities... we could call her Condi Bingo, like she's in the cast of The Sopranos.

Think of what the bingo cards would look like!
Think of the possibilites!!!!
Oh be still my aching domino theory!!!!!!!

and I LOVE the madison.

good god this post was rich!!! thanks for making me laugh my stressed out ass off PSP..

I think the Franklin Mint would make more off the collection if they add spoons to the base of each one.
Who wouldn't want to proudly display their Franklin Mint Diplomacy Spoon collection?

Karen do you mean, like the little country flag at the bottom AND then their picture at the top, concave inside the spoon of the ambassador, and then oh, oh, oh a blank one so that the little dreamers in all of us could like pretend to be an ambassadors, like Condi Bingo (nee Lavrov)?

No, I mean a little statue of all of them with the spoon bowl under their feet.
You can do an enamel flag in the bowl of the spoon, to make them super fancy.
Then add a real tiny one of Bush, to use with cocaine.

I thought about this for awhile, and it turned out the easiest thing to make out of it was the Foreign Ministers Clock: http://www.z7q2.com/clock.htm. Because foreign ministers always know what time it is.