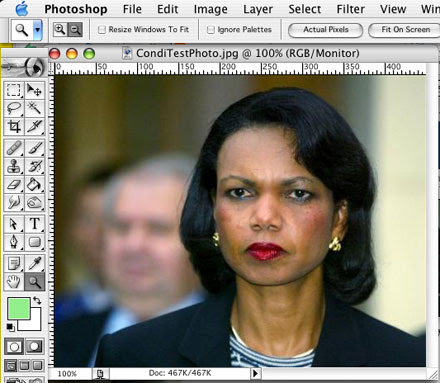 The other day, I wrote about USA Today Online's strange Photoshop job on Condi. The USAT photo editor's excuses seemed lame to me and also to Michelle Malkin, marking probably the first and only time the two of us would ever agree about something. Today, Howard Kurtz wrote a brief paragraph, sadly not online, about the kerfuffle in his column in the Washington Post. Again, the idiotic justifications offered by USAT really jumped out at me. Let's look again at what spokesmodel Steve Anderson told Editor and Publisher:

"USAToday.com, like other news organizations, often adjusts photos for sharpness and brightness to optimize appearance," Anderson told E&P. He added that an online editor sharpened the photo to brighten Rice's face, but did not do so in an effort to make her look strange."

Well, lots of people aren't familiar with Photoshop, so I'm not surprised these statements went unchallenged. Whoever talked to Howard Kurtz was a little more precise, saying the photo had been sharpened and her face had been brightened. I know better, though. Let's review: up top we've got the original AP Photo. Below, we've got the fun-sized version next to the ludicrous alteration posted by USA Today on their web site:

Hmmm... it doesn't really look brightened or sharpened to me, but that's super easy to check. Let's put half of the unaltered photo on top of the altered one. That way, any sharpening or brightening will stick out like a sore thumb:

So it looks like the photo was neither sharpened nor brightened. Here's what sharpening (on the left) and brightening the face (on the right) looks like:

Note how the sharpening does brighten the eyes. On a whim, I tried oversharpening just the eyes:

Similar to USA Today's silly results, but still not quite the same. Finally, I tried the most primitive way to simulate the results by clumsily using the paint brush to whiten her eyes. My results are below on the left, compared to, again, USAT's on the right:

And, well, mine's a little different, more demented than evil, but the effect is exactly the same.

The last piece of the puzzle is this: Online photo editors do not routinely "touch up" AP photos; AP does that for them... it's their job. It's totally obvious to me that despite what USA Today's spokesman says, the pic was altered clumsily and purposefully to make Condi look wacky. And then they got caught. And then the company used technobabble to cover for it. Who is this mysteriously untalented yet hilarious image mangler?

Would somebody at USA Today please buy him or her a beer?

EDIT: Also, is anybody else kinda freaking out about her neck?

THis is sort of a waste of time to make that and why dont u do it to Bush? I like her wayyyyyyyyyyyy more than i like Bush!

Honey, it's not about Condoleezza (for once), it's about USA Today getting busted for something silly happening and then lamely (yet successfully) trying to explain it away by using Geek Babble.

Secret message to Pony Pals: Visit the blog of the commenter above and realize that I have finally, finally reached my target audience.

"We got both kinds (of music). Country AND Western"

This is the sound of two sparkly hooves clapping for joy at reaching your target! YAY!

In other news, I used photoshop for the first time yesterday. I so wished I had a little angel sparklepony on my shoulder to help me out cause I totally blew it.

Princess SP, I'm no Photoshop fairy but can't you just overlay the old Condi and the new Condi and subtract to see if they bothered to do anything else?

So true. I did just that and, while it was hard to align the two exactly, it certainly seemed like only the eyes changed. Definitely no sharpening.

Wow, Princess. I went to Brunette's blog and you were right. Her latest post is awesome and frightening, to wit: "DID SOMETHING VERY BAD. I Am now grounded for SIX MONTHS OH MY GODDDDDDDDDD WELL I BASICALLY HAVE NOTHING WHICH SUXSSSSSSS." Congratulations.

And as a fellow Photoshop fairy, I'm glad somebody pointed out the not-so-obvious to people who don't know the program. I've painted out a lot of red eye in photos in my time (find a pixel color that matches the eye, use a semi-transparent paintbrush and just dab at the most egregious red pixels), so I know a bad eye paint job when I see it, and the USA Today pic was an intentionally terrible one.

You're right. If the anonymous saboteur ever comes out of the closet, we all owe him/her a beverage of their choice.

When I did pre-press I used to photoshop tiny skulls into the people's eyes just for fun.