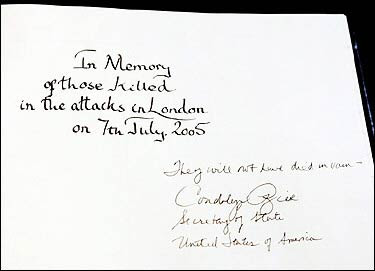 US Secretary of State Condoleezza Rice signed a book of condolences at the British Embassy in Washington by saying, 'They will not have died in vain'(AFP/Pool/Larry Downing)

Of all the ghastly photos of Condi you have offered us, Princess Sparkle Pony, this may be the creepiest. What is "They will not have died in vain" supposed to mean, that the United States will go out and murder some more Muslims? And Condi will be leading the charge?

There was an article in last week's New Yorker about the father of a soldier who had died in Iraq a few years ago. One of the worst things about people's reactions were these kind of statements - about the great sacrifice that he made, that it was not in vain, blah, blah, blah. This administration could care less about the people they kill without a second thought.