What better way to start the day than with a Condistravaganza?

First, imagine how thrilled I was to find out that there's a Condoleezza action figure! Here it is, below, and even though it looks a little more like Mike Tyson than Condi, I ordered one lickedy-split. I'll have to get it a new red power suit ASAP, though: 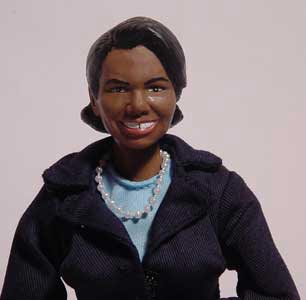 Next, Pony Pal™ Sean (spelled the right way) forwarded to me this heartfelt Condi ballad. It moved me to tears. Sean wanted me to make sure to credit his source, Transbuddha.com. Thanks a bunch, Sean!

And finally, I was experimenting with new looks for Condi, and I did this quickie in an attempt to make her more appealing to Georgia Republican Farm Boys: 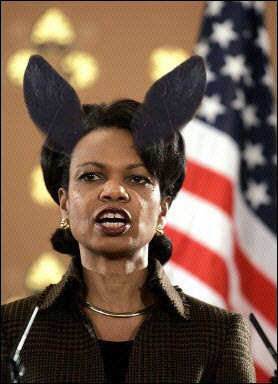