Gallery On Baum's Bushmiller Forgery: Let's Take A Closer Look, Shall We?

Ohhh... why does this piss me off so much? I guess it's because I'm so fond of Bushmiller's work that I hate to see it misrepresented by such a bad drawing. Here's the Gallery on Baum's fake (Yes, I am saying that: fake, fake, fake, and intended to deceive) Bushmiller which I wrote about this morning on the right, and the genuine panel from his 1957 Sunday strip on the left: 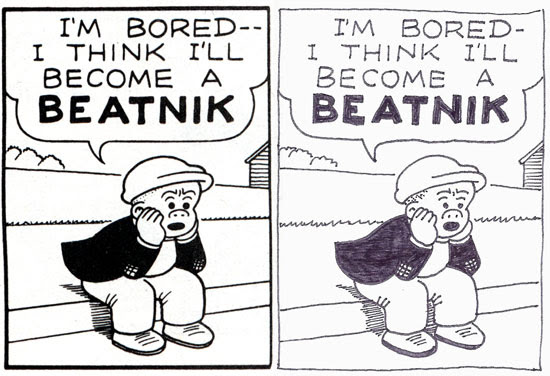 Goodness, those are awfully close (NOT in quality, mind you). How well do they match up? Let's turn the original blue and the fake red and overlap them: 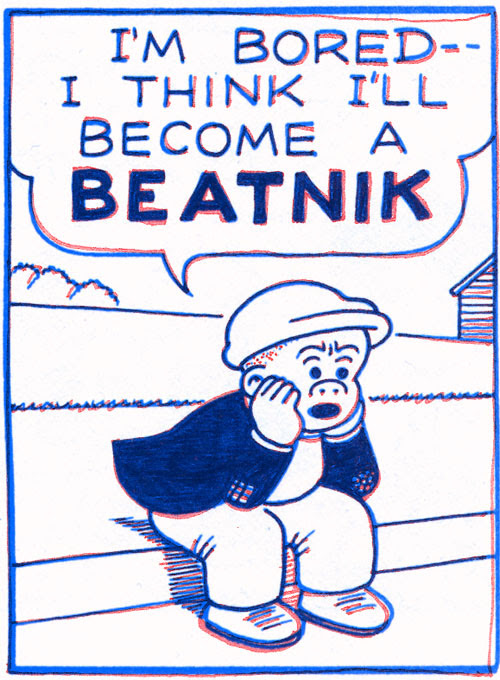 It's positively uncanny! No, it's not uncanny: it's a tracing done on a lightbox. But could it be a tracing by Bushmiller himself? Ask this question: why would he do this? If Bushmiller were to dash off a quick sketch for a fan, why would he lug out a lightbox instead of... well, dashing off a quick sketch? Also, if Bushmiller himself were doing the tracing, one would expect him to understand his own drawing and not make what are called "tracing errors." Does the Gallery on Baum's drawing include tracing errors? Oh, yes, that and more. Let's really get into this: 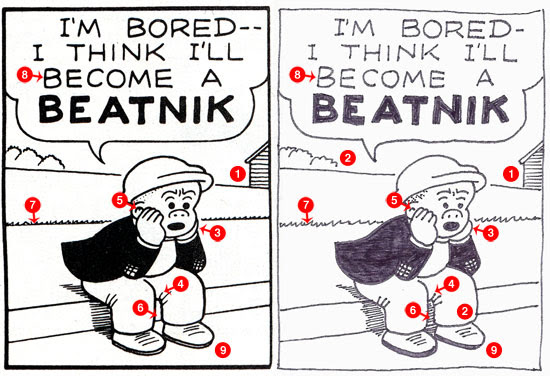 (Click to open a larger version in a new window and play along at home!)

I could probably come up with at least five more points, but I think I've already belabored the obvious here.

And don't even get me started on the signature.

One last thing: Could Gallery on Baum's drawing be a rough sketch for the final strip? No: Bushmiller's rough sketches didn't look anything like this, and he didn't make them on index cards with felt-tip markers.

UPDATE: Bushmiller authority Mark Newgarden (and co-author with Paul Karasik
of the upcoming HOW TO READ NANCY)  has this to add about the drawing:

As far as we can tell EB never owned a light box.

His real drawings for fans were nothing like this. They are usually quite
tight and often water colored-and never drawn in a ruled panel (let alone
one taken from a daily strip!)

Click on the "Gallery on Baum" topic tag below for more in this series.
Posted by Peteykins at Monday, March 05, 2012

Email ThisBlogThis!Share to TwitterShare to FacebookShare to Pinterest
Labels: Bushmiller, Gallery on Baum

I haven't seen that particular page, but those are all just scans from Brian Walker's "Best of Ernie Bushmiller's Nancy" book. Great stuff!

The guy should be arrested. He's committing public fraud. The biggest and most obvious tracing fuck-up, which you didn't bother to point out, is the lettering of "BEATNIK" which is completely different and less crisp in its lines than the original.

You live in D.C. Can't you get the FBI on this, or are they still worrying about terrorists and radical environmentalists instead of Serious Crime?

This is fascinating! Our very own Princess Sparkle Pony, Forensic Cartoonist!

Mike, I thought the overall horribleness of the lettering pretty much spoke for itself. That "B", though, is totally convincing forensic evidence.

It's frustrating: so many have condemned this guy, but then they all shrug and say, "Somebody should do something about it."

I did actually file a police report with the Pittsburgh PD, but I honestly don't expect to hear back from them at all.

I really don't want to just let this go, though.

Example #4 totally cracked me up. The original has the pants crease drawn in an upside down u arc (I'm not artistic at all), and the copy has the crease drawn like a u, which makes Sluggo "bulge." HA!!HA!!

Can we do more of these? And also, don't forget about the Santorum answers. I couldn't figure them out.

Great work, Peteykins. There are so many things to point out, let me say that Sluggo's right hand is so cleanly drawn in the original and such an ugly lump of clay in the forgery, much like what sfmike said about the lettering of BEATNIK.

Call the authorities! (Well, Peteykins is the authority, I mean the people who can arrest and convict this blackguard.)

Can we do more of these?

I would LOVE to. For instance: Gallery on Baum is currently offering a drawing "by" a famous animator which is traced from a drawing made after that animator died!

Also, what can be done about those high seller ratings on eBay? People are being deceived!

I don't think there's anything that can be done about ignorant collectors leaving positive comments about their transactions.

I just posted a link to this page a s a question to the seller on the eBay item listing. Tee hee! I love stirring the pot.

OK, so I received a reply today at 2:59PM California time. The reply I received said, "I didn't know anything about it."

How interesting, given that the auction was originally set to end on March 8. How about that!

How bright does the light in a lightbox need to be to make tracing onto an index card possible?

Anonymous, I've looked through Bristol board (with difficulty, admittedly) on a lightbox. An index card isn't all that much thicker than bond paper. No problem. Some areas would be harder to read, though, such as the patch on Sluggo's left elbow... and lo and behold, note how the tracer gets it wrong there, in addition to the other tracing errors already discussed.

Is it just me or is The Gallery on Baum starting to get a real rep for forgeries?

I'm surprised that no-one's noted that it seems to be drawn with a crappy non-lightfast ink-pen whereas Bushmiller (as far as I know, feel free to correct me)would've used pen-and-ink--anyone know what type of nib Bushmiller worked with? I'd guess a Hunt lettering nib, B or C, maybe?
Anyway those "scribbled" spotted blacks are a dead giveaway....

Good observation and good question, vollsticks. Mark Newgarden would know the answer to that for sure.

I didn't mention the crappy pen, because I thought it was pretty obvious.

My God, done a bit of clicking around on here, I could never have guessed the sheer volume of ropey "art" that guy's selling! The fact that he won't have his collection authenticated speaks volumes, to me.
Who the hell is buying this stuff?!?!

Excellent forensic analysis! Thanks for explaining in detail how you do this.