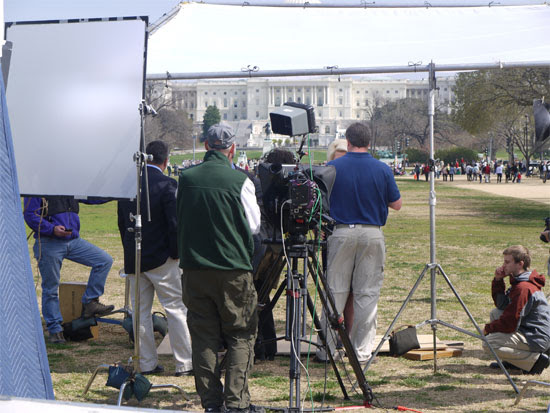 (All photos by me. Click above for larger.)
I was on my lunch hour and crossing the Mall to photograph an attractive ugly tour bus (see previous post), when I spied an intriguing vehicle parked on 3rd [EDIT: Whoops, on 4th, actually], what appeared to be a mobile hairdressing salon. Nearby on the grass I could see what looked like a typical news-style "stand-up". Nearing the mobile beauty parlor, the door opened and out stepped what I assumed, based on her tailored black suit and highly polished make-up, to be a newscaster. What really transfixed me, however, as I strode not three feet behind her was the extraordinary presence of one of the most intoxicating, profoundly moving (unmoving, actually) hairdos I have ever been lucky enough to see in the wild: a perfectly globe-shaped net of intricately interwoven strands of sunbeams and fabulous gossamer-like blond spiderwebs. Dazed, I felt the power of the hairdo. I felt drawn to it. I wanted to obey its commands. Its complex, spherical architecture humbled me. Its perfection clouded my thoughts as I plodded away and tried to concentrate on photographing the tour bus.

On my way back I stopped at a bench and watched the incredible hairdo doing its thing for the video cameras, now accompanied by a paunchy white-haired man in a dark suit. Something was really familiar about this guy! "That's Newt Gingrich," I thought to myself. And then suddenly it dawned on me: if that was Newt Gingrich, then that meant the magnificent hairdo-wielding spokesgoddess was none other than... the fabulous Callista Gingrich!

Heading back in, I tried to get some sneaky photographs but, as you can see above, I couldn't get a good angle on the Gingriches. Even mostly obscured, however, you can still get a sense of the immaculate perfection of this sensational hair helmet in this exclusive detail: 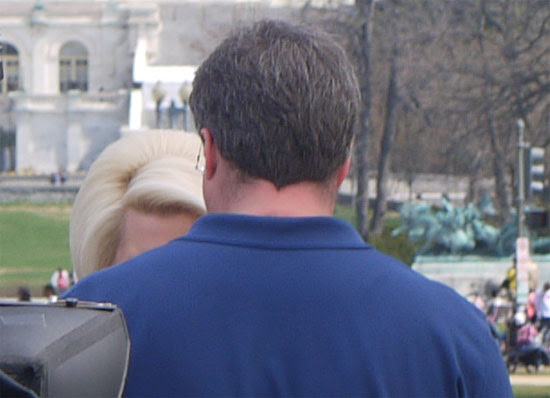 Oh, how I wish I had been able to snap out of my hairdo-induced reverie earlier to reach for the camera so you could see the breathtaking rear view! But just so the encounter wouldn't be a total loss, I managed to get this shot, Callista Gingrich's mobile hairdo command center (click for bigger): 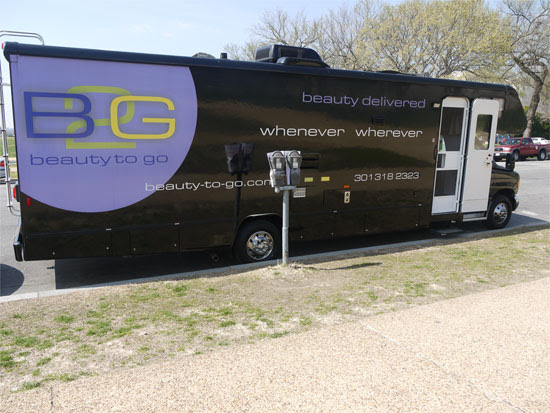 Some of you Pony Pals have been trying to interest me in Callista for quite some time, and I've demurred. Now, though, I'm totally sold on her. Some hairdos simply can't be ignored.
Posted by Peteykins at Tuesday, March 22, 2011

Email ThisBlogThis!Share to TwitterShare to FacebookShare to Pinterest
Labels: Callista

"Some hairdos simply can't be ignored" is going to be my new mantra.

What sfmike said! I want to emblazon "beauty to go" on the side of my car now!

She is fabulous. Well - no, she is not. Her hair however, a very different story.

I'm glad the hair-do timing gods put you in the right place at the right time!

Yay!So glad you have a new hairdo to follow (her helmet puts Nancy Grace's to shame).

So does a single strand of it jiggle out of place when she lies back and thinks of England?

Thank G-d in many languages that Peteykins has become entranced by "the hairdo that cannot be ignored." Less subject to wind than the hairdo that is Cindy McCain's, just as glassy a stare as Laura Bush's, Tertiary Wife Callista Gingrich's hair is--well, I've got my Halloween look for this year DOWN!

P.S. Who was naming their children "Callista" in the '50s and '60s? Anybody? Everybody in my class was named Sandy and Kim and Toni and Nancy and things that would not look out of place on a Mattel box. (Except me.) I would lay odds that Callista's birth name was actually something more downscale, like Charlene. Newt's already jettisoned a Jackie and a Marianne.

Because I read this post right before bed, I had a dream about Callista's hairdo last night. In the dream, I tried to take a picture for you. Thanks for that, Princess!

They named her Callista when they found out that Caligula was for a boy.

Callista is totally made up.
I'll bet her given name was really cornball, like Clara.
Coming from Texas, that helmet hair is all too common a sight.
It just screams, "GET AWAY FROM ME!"

I find it pretty funny that despite the lure of the spherical coiffdrop that is Callista's hair and her (less entrancing) connection to Republican Zombie Newt Gingrich, Peteykins was determined to photograph a bus.

Granted, he lives in DC, and I'm sure it can be like a political Hollywood Squares (which Peter Marshall once described as the game show where stars on their way up met stars on their way down) to the average resident, but still: an ugly tourbus.

And, in a perfect storm of PSP interests, he managed to get a picture of the 'Domobile, simultaneously educating me that such services exist, and making me wonder how "beauty delivered" works. (Like, do they go to some place with a surplus of beauty, herd it forcibly onto the bus like homeless relocation programs, and then deliver it to areas with a deficit of beauty? Or is there some beauty factory somewhere, with some giant entity that generates beauty, like slurm?)

Actually, the poor dear was born in 1966 - kind of late for the era of Mrs. Biscuitbarrel, and, I admit, myself. It was almost the hippie era!

And I am amazed at the beauty-to-go van. Is there that much market for coifing on-camera conservative personalities to invest in such a machine? Do Sarah Palin and Michelle Bachman, and Sharon Angle use these services for their grass-roots appearances? I'm amazed.

"Rhonda, who manages the make-up department for the DC Bureau of Fox News Channel, has prepared political hot shots, movie stars and real people for their close-ups for decades. The Beauty To Go team of professionals can do the same for your event or special occasion."

Now it's clear why all the Fox News bimbos have the same look!

Ha, ha! OMG, that website is so good. I kept clicking on various parts of it, hoping there were other pages, but alas...

I love how they offer "politics" as one of their services.

Obviously, Callista is the star in the East we have been waiting for! There hasn't been this kind of excitement for a new PSP favorite since Ursula.

You cannot abandon her now, Peteykins. The public clamor is too great. As Blago might say, "It's fucking golden."