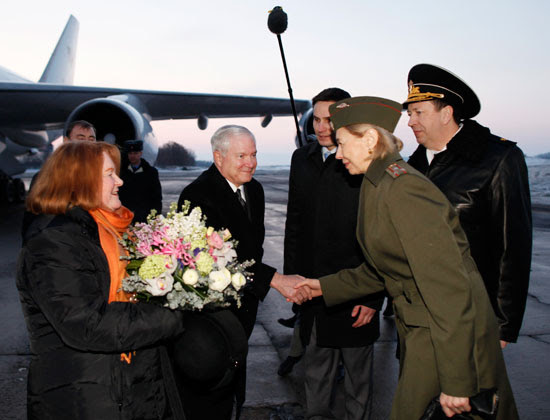 I used to feature Robert Gates a lot here at PSP, but for some reason I've been neglecting the adorable, fun-sized secretary of defense of late. Why is that? Will you look at the shot above? SO CUTE. Look, he has a miniature wife, too! Could you die? Wait, look, here's another shot: 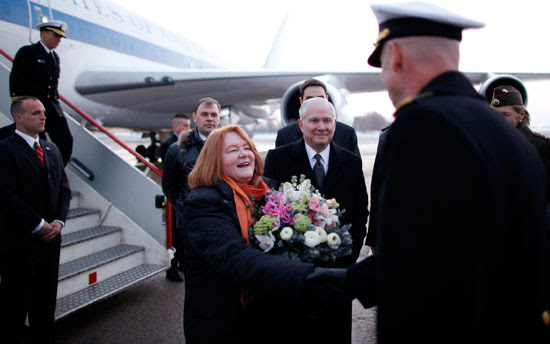 OMG, they are like puppies! They are little dolls surrounded by big people in costumes bending over to say hello and it is just the cutest thing EVER. My Li'l Secretary of Defense™®!

Speaking of which, here he is on March 12 with the King Hamad of Bahrain in a very fancy Heraldic Sofa* photo-op: 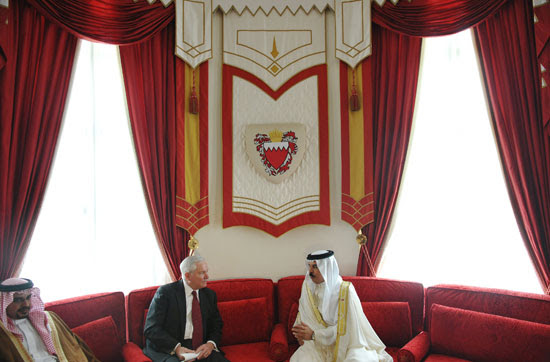 *A close relative of the beloved Matching Armchairs photo-op.
Posted by Peteykins at Monday, March 21, 2011

Excuse my ignorance of world affairs, but who is the stunningly-uniformed giantess?!

(1) Those Russians are fucken HUGE!

(2) It looks like Gates is trying to sit as far away from the King as possible.

(3) Who the fucke is that sullen smirking dude on the big red sofa with Gates and the King?

What Jim said -- or have the Russians somehow cloned Hillary and crossed her chromosomes with Dolph Lundgren's to make a fetching epauletted amazon?

If so we're doomed, doomed!

Mrs. Secretary Eensy has the orangest eyebrows ever.

Drew you stole my line. Who the eff has red eyebrows like that??
It's an eyesore.