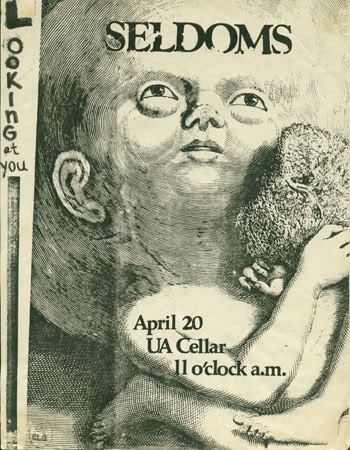 Click all for bigger.
Here's another batch of flyers from the early 1980s Tucson punk/new wave/whatever music scene. The Seldoms were high school friends of mine. They were one of the earliest and most controversial bands to emerge in the early 80s. They were young and almost unbelievably amateurish, noisy, chaotic and awkward, almost like Tucson's Shaggs, but more self-aware. They drove other bands crazy, because while they were trying to be "polished," have cute images, and get record deals, the Seldoms were just utterly non-careerist and seemingly uninterested in making their music more palatable for the masses. They were a lot of fun. The above flyer was from their final stage, in 1983, where they sounded like an almost-normal psychedelic revival band. Below is from earlier; the date corresponds to 1980 but I'm not sure that's right: 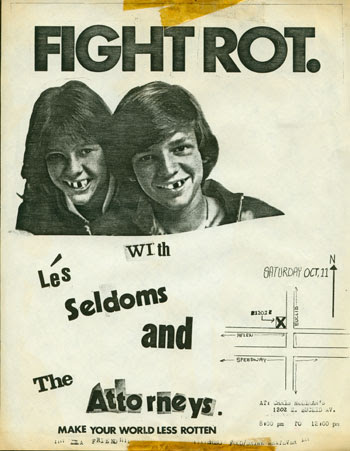 The Attorneys were another teen band. They were kinda forgettable garage punk, if I remember correctly. Below, another early one, from 1980: 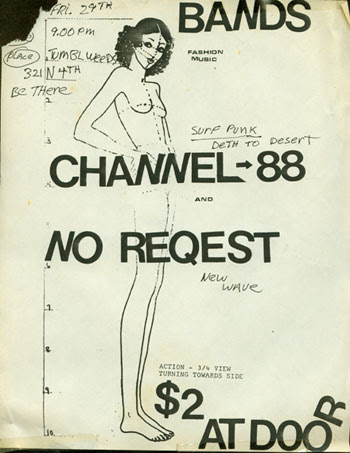 The one below is from 1983. The Backstage started as Tumbleweeds, then became Tumbles, and finally The Backstage before burning down right around the time of this show: 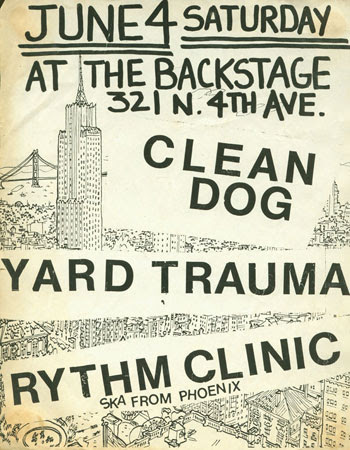 Clean Dog were also good friends of mine, and when they broke up, I formed a band with the lead guitarist, Joe Humble, a band which eventually included Pony Pal Mad Duane on bass. Yard Trauma were interesting at the time: psychedelic rock with noisy elements like short-wave radios. Later they became a horrible Strawberry Alarm Clock-style psych revival outfit. Rhythm Clinic were hateful bandwagon-jumpers from Phoenix. Below, from 1981, two hilarious "teen nite" flyers for the same event: 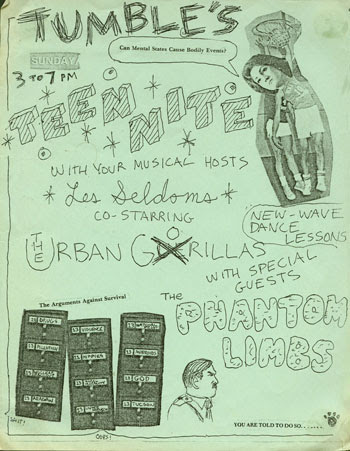 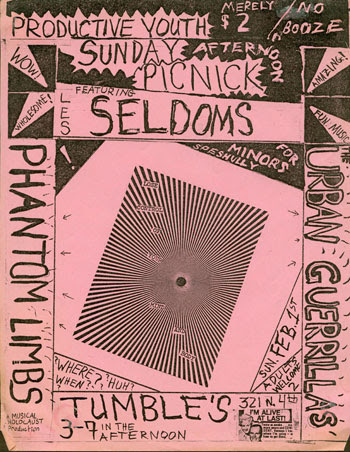 The Phantom Limbs were one of the hardest working bands in Tucson at the time. A three-piece, they played kind of clever, angsty, jangly ironic pop/wave songs which you got tired of after hearing them over and over for years. Still, though, A for effort. They were also one of the few bands to put out vinyl. The Urban Guerrillas were also high school friends, and they took themselves very seriously, indeed. They were heavily influenced by Dead Kennedies and The Pop Group, so you can imagine how tiresomely political they were, like getting lectured by teenagers. What's hilarious about "teen nite" is that I don't remember ever being particularly troubled by not being able to get into bars to see bands even when it wasn't "teen nite." After all, the club owners knew who buttered their bread.

I probably only have a couple more saved flyers; I'll post them as I find them.
Posted by Peteykins at Monday, May 03, 2010

Talking a out Arizona Punk rock and no mention of the Meat Puppets? whats wrong with you?

Oh, I have Meat Puppets memories. You better believe!

Wow, channel 88 were SO GOOD, so musical, kinda prophetic in some ways, so unhealthy. one of their 4 chord songs is forever in my mind (don't know the name of it but one lyric was "...how could I ever tell you, I want a fuck not a wife...". musta been their flyer since 'no request' is spelled incorrectly. THAT band could really spell!

Hey, Peter! Michael from the Seldoms here. So lovely to discover your thing. Anyone remember Memory Product? Johnny was a louche, extremely moody guy who, if still alive, is probably going to stalk me just for mentioning his name. The bassist was the opposite. Totally sunny and easygoing. MP played this very atonal music that kind of sounded like DNA, even though they never could have known them at that early time. MP took the Seldoms under their wing for a time, and even helped us cut a 45 in San Francisco.