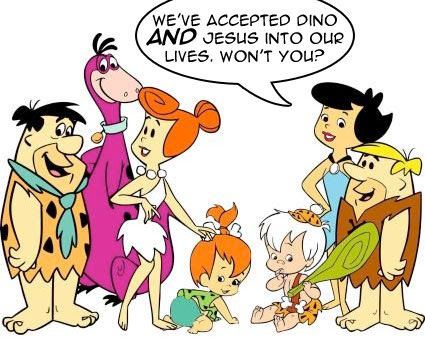 You may recall that day before yesterday I briefly became a fundamentalist, young-earth creationist Christian, sternly warning about the many dangers posed to scientists by the Devil's clever antics. Oh, oh, it's happening again.

But wouldn't you know it, one of the very scientists duped by Satan's obvious-to-him-by-now-I'm-sure tricks sensed my wagging, disapproving glittery hoof and, lo, has admitted his role as the Devil's unwitting pawn on this very blog! Praise him!

Furthermore, Dan Chure, the repentant paleontologist, would like you to know that a PDF of his "demonic paper" on the Evil One's fabricated "Brachiosaur" can be seen here. Just, you know, in case you're interested in the ravings of a delusional secularist.

I'm glad that Dr. Chure, who I think we can now call Pony Pal™ Dr. Chure, has recovered, but upon viewing his paper, I can't help but feel that he should have realized his errors earlier. Clearly visible in the aerial map of the site where he found the cleverly "hidden" dinosaur bones is the laughing, mocking face of Satan himself: 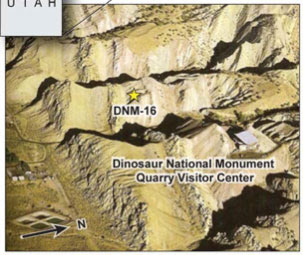 Can't see it? I'll highlight it: 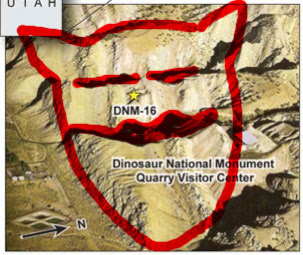 UPDATE: haw, more in the comments to this post.
Posted by Peteykins at Friday, February 26, 2010

The dark shadow at the bottom could be part of the face of yet another giant Satan lying with the first giant Satan in what can only be called an unnatural position.

It's very telling than DNM-16 is very close to the cute little button nose of giant Satan #1. Could it be a mole like our Satanist president has on his nose?

Pretty sure there's a crescent in there somewhere.

This is Griffin Chure, Dan Chure's son. When I returned home from college this weekend to visit I found him sobbing that he has wasted his "entire scientific career finding and studying dinosaur bones planted by the evil Mr. Beelzebub.” I asked my irate mother what happened and she simply pointed to the computer and said "Sparkle Pony blog."

I looked at the blog and now it's my turn to step in. With more dispassionate and objective inspection of the outcrop photo its is pretty clear that the “Face of Satan” is not there. Maybe you think it is, but its not. Careful examination of the details of the rock layers reveals the real image, which you can see at http://img717.imageshack.us/i/darwindnm16.jpg/.

As for you seeing Satan’s Face in the rocks around DNM 16, all I can say it that apparently they don’t offer many geology courses at Sparkle Pony University. I have fixed the obvious mistakes of geological interpretation that you made and the corrected image can be seen at http://img231.imageshack.us/i/bullshitp.jpg/ .

I’m happy to report that my father is now better and busily writing his next scientific paper. If you are a reasonable equid I’m sure these new images will make you see the light. I expect a full written public apology. Since this is the Sparkle Pony blog, your apology should be written in glitter.

The fact that you looked at the face of Satan and saw "Darwin" basically proves my point.

OMG! Napster's back ... only without the headphones!

K so you saw the face of satan! Good for you! Maybe its just natural rock formations like the "face on mars"? People see what they want to see not what is actually there to see. You wanted to see satan, so you saw it. Like previous posts have said, it looks like napster without the headphones to me. Before you start to make accusations please look into the actual facts. Do not blame religion or science because when you start doing that it starts to make you look either hypocritical or just dumb.