Oldest Trick In The Book 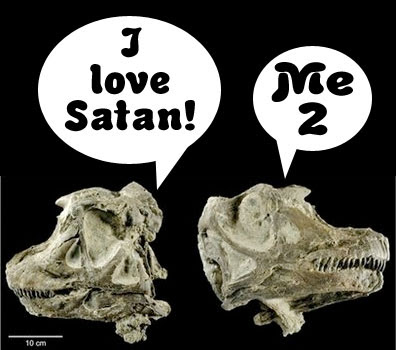 This image provided by the National Park Service on Tuesday, Feb. 23, 2010 shows the right and left views of the complete skull of the newly-discovered dinosaur Abydosaurus mcintoshi. Paleontologists say this new species of dinosaur was found in Dinosaur National Monument, Utah hidden in slabs of sandstone so hard they had to use explosives to free some of the fossils. (AP Photo/National Park Service)

Satan is up to his same-old wicked deceptions! It's well known that the Evil One loves to scatter "fossils" across the land to fool man, and he's done it once again. This time, Satan put the "dinosaur" bones right where the scientists were looking, covering them with extra-hard rocks to make them all the more tantalizing, and even played into their desire for "transitional" species. And the gullible scientists, of course, believed it all and naively declared the "bones" to be millions of years old, despite the Word of God in Genesis.

Haw, gets 'em every time.
Posted by Peteykins at Wednesday, February 24, 2010

And Satan put them in Utah, home of his favorite false religion. He's a clever one, that Beelzebub!

Fossils are an Obama socialist plot. They were all killed off by death panels.

As one of the authors on the paper describing Abydosaurus, I want to say that this is the finest review of a scientific paper I have ever seen. I wish I had realized the truth of the specimen before devoting so much of my scientific career to it.

The demonic paper is freely available at http://www.springerlink.com/content/lpn30h8tx2231223/fulltext.pdf

Dan, you are the funniest scientist on this planet.

I thought dinosaurs were invented by the CIA to discourage time travel!