Hairdressers and Fetuses Will Destroy The Teabaggers 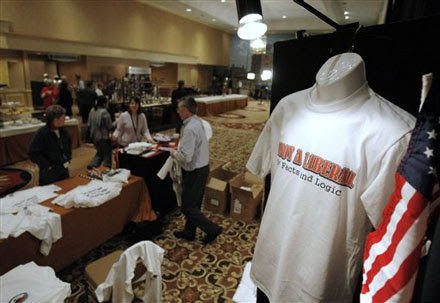 Kerry Schimelfenig, center, waits on customers looking over shirts at his stand in the vendor area of the National Tea Party Convention in Nashville, Friday Feb. 5, 2010. (AP Photo/Ed Reinke)

Doesn't exactly look bustling, does it? But yes, the Tea Party Convention is in full swing. Every "MSM" article I've read in the last few days asks, basically, whither the tea party movement? What's next?

One thing the teabaggers themselves have yet to resolve is this: does the movement's still vaguely-defined platform include so-called social conservative issues or does it not? The Washington Post's writeup today features a couple of consecutive paragraphs which demonstrate that this is going to be a real problem:

Annie and Tom Runn, who have done missionary work in Haiti and Cuba, spent last week at the Republican National Committee gathering in Hawaii, where they live, and then came here. They can't support Obama because he's for "abortion and homosexuals," Tom Runn said. "We would support and vote for Sarah [Palin] over and over and over."

Lori Christenson, who started the Evergreen-Conifer Tea Party in Colorado in her house using the social networking site Meetup.com, wants politicians to act like their power comes from the people, not from their celebrity. Her group refuses to get involved with conservative social issues, which she calls "very, very divisive."

Why yes, those issues are very divisive, indeed! Unfortunately for them, they can't simply ignore those prickly issues and hope nobody notices. Will we see tea party candidates who refuse "to get involved with conservative social issues" in the upcoming elections? It will be interesting to see how that works out.
Posted by Peteykins at Saturday, February 06, 2010

What anyone should do when starting a grassroots movement is NOT promote the candidate, thru usage of their name. Use the blank moniker in your announcements:
Candidate 1 blah. blah, blah
Just like in the Dating Game TV show. This way, NO ONE will know a priori as to who is coming to dinner. Simple.
But the TEATARDS will never do this because they ONLY thrive on flagellating any and all publicity of their treasonous activities.