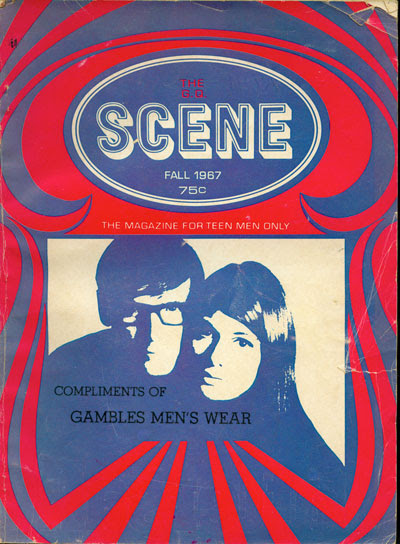 Oh, you are in for a treat. This is a copy of The GQ Scene, the teen™ version of Gentleman's Quarterly, from Fall 1967 when it was published by Esquire. It so full of good things that it would be irresponsible of me not to just go ahead and scan the whole damn thing as a gift to the internet. It's "perfect bound," unfortunately, so that makes for less-than-optimal scanning. This is part one, and you can click anything to make it bigger.

First, the inside front cover and the first page: 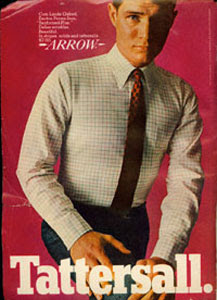 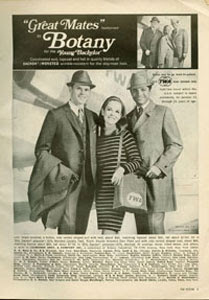 The masthead (followed by a boring ad) reveals pretty much GQ's regular staff at that time: 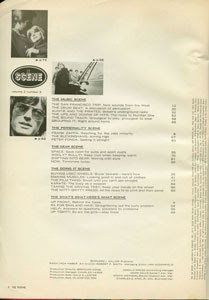 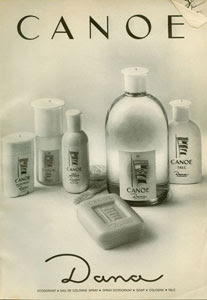 Managing editor Jan Hodenfield has had and continues to have a busy career in print. Here she is mentioned in an article in the NY Times. On a more somber note, the obits for publisher Bernard Miller and Editor Jack Haber, who died very young, can be seen here and here. The next spread includes model credits and an ad for Oshkosh clothing: 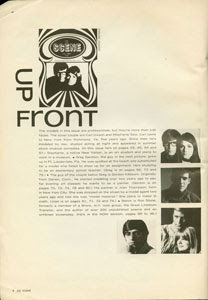 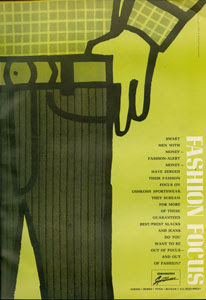 This is the beginning of a surprisingly thorough article on Frank Zappa, all the more surprising for its inclusion in a teen magazine, but written in a badly dated style, and an ad for a very ugly sweater: 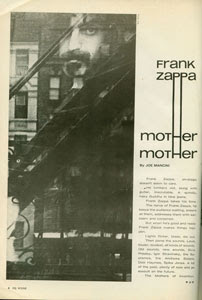 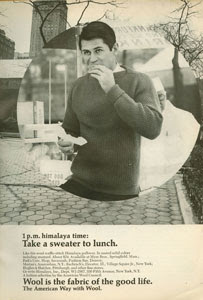 More on Zappa and a cute ad for a terrible car: 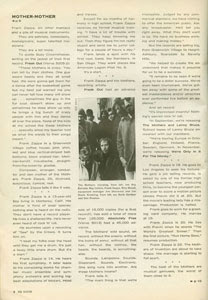 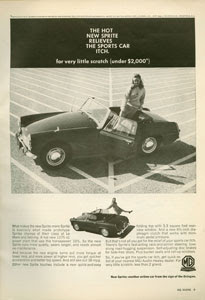 Zappa article concludes with an ad for fairly attractive, boxy Zenith electronics (the better upon to listen to your new Mothers of Invention albums, presumably): 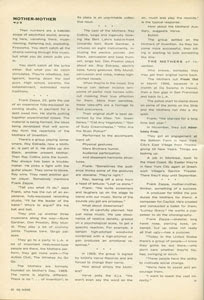 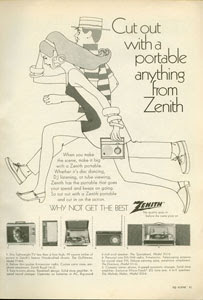 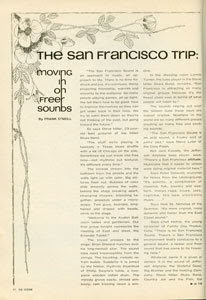 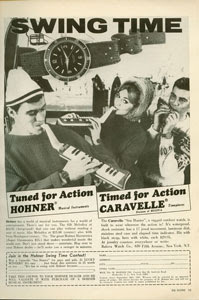 Stay tuned for the rest of the mag! UPDATE: Hello, Crooks 'n' Liars readers! I'll have part two of this up by around 6PM EST.

So so much to see here! Princess, I'm so glad you're back.

I'm just trying to decide whether that Hohner ad placement was purposeful or not. Either way,t that double-page spread is pure gold.

My father worked in the garment district in Manhattan. He used to bring home various rag trade attempts at hipness. The clothing industry really lost touch with young people back then. Now kids are lined up to buy brand names. Darned kids.

Princess, thank you for keeping me from buying another old teenie magazine on eBay.

Truly, a service for the community. I haven't been this excited since someone scanned and posted the '73 Sears catalogue.

M-m-m-m. Canoe and English Leather. A whiff of either makes me a little dizzy even today. All the boys wore one or the other - I associate it with slow dancing in they gym.

another rockin teenage mag with zappa, he got around:
http://www.afka.net/Mags/Teen.htm


another rtm with zappa:
http://www.afka.net/Mags/Bravo.htm

Wow, awesome slime.o. I didn't find that while Googling. I haven't reached the Zappa guitar ad yet, but it's upcoming.

A lot more glowing toward Frank Zappa than in GQ's latest issue (in their "Open Letter to Al Gore"):

Now that you guys are broken up, we can tell you the truth: The PMRC was right about a lot of those albums they said were terrible. 2 Live Crew's oeuvre kinda takes a dive post-"Me So Horny." And regardless of what Vaclav Havel may have told you, Frank Zappa is totally overrated. He's a "composer" the way a guy walking around in a WHO FARTED? T-shirt is a "humorist." To be fair, We're Only in It for the Money is okay, and Joe's Garage has its moments. Maybe Apostrophe, although that one's really only good if you're high. (Just get Bill to burn you a mix CD.)